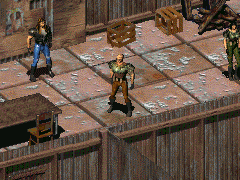 “I'm quite happy. I'm very happy because there are lots of things that bleed.”

Victor is a member of the Skulz gang in Junktown around 2161. He's holding camp in the back of the Crash House, together with their leader Vinnie and some other gangers.

Victor is a pretty weird person. He tends to look at people funny. According to other gang members, he is the meanest member of the Skulz. Apparently, he likes torturing iguanas that he catches.

Victor appears only in Fallout.

Retrieved from "https://fallout.fandom.com/wiki/Victor_(Fallout)?oldid=3337858"
Community content is available under CC-BY-SA unless otherwise noted.