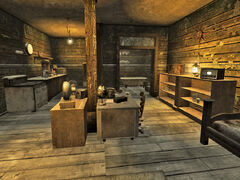 Play sound
Metallic_Monks.ogg
“Keeps to himself, mostly. You want to know more about him, you'll have to ask him yourself. He has a shack on the southern edge of town.”— Doc Mitchell

Victor's shack is a building in Goodsprings, serving as the home of Victor in 2281.

Victor's shack is located directly southeast of the schoolhouse, just past the ruins of an old house. An Old World flag adorns the front of the building. Upon entering, there is a usable bed directly to the right, a desk directly in front of the Courier, shelves to the left of the desk, both of which hug a central support column, and shelves along the right wall at the foot of the bed. There is a weapon repair kit on the desk.

There are two ammunition boxes, one at the back of the shack on top of the work table and one on top of the righthand side shelves. In addition, an oven and a sink with radiation-free drinking water are also found here, along with some usable shelves on the left wall above the oven and the adjacent work table. The Courier is free to use the shack as they wish, as nothing inside is flagged as owned, and Victor does not mind them trespassing.

Victor is not usually present in the shack, instead rolling around the town of Goodsprings. When Victor leaves for the New Vegas Strip, an inactive "Victor" is found in front of the shack.