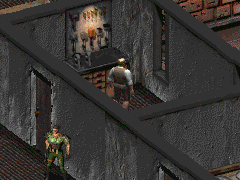 “Dad, you can barely tie your shoelaces, much less repair anything with moving parts.”— Valerie to Vic

Vic the Trader is the character the Chosen One is originally dispatched to find in Fallout 2. He is to be found in The Den in 2241.

Vic sold the tribals of Arroyo a number of Vault 13 water flasks as holy relics. He originally purchased them from a trader in Vault City. He resides in Klamath, but Metzger, the slaver leader, has taken Vic prisoner after he sold him a busted radio and is holding him inside of their Slaver's Guild compound.

Vic has a daughter who lives and works in Vault City, who is the fruit of love between him and a Vault City citizen. He never loved her much, often calling her the Desert Viper. It seems his child has inherited her mother's genes.

Vic appears only in Fallout 2.

Vic, being a trader, is likely a reference to the chain of Tiki bars named "Trader Vic's", the first of which opened in Oakland near San Francisco in 1934.

Retrieved from "https://fallout.fandom.com/wiki/Vic?oldid=2741642"
Community content is available under CC-BY-SA unless otherwise noted.