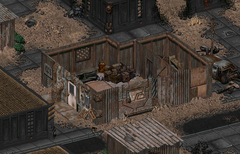 Vic's radio on the shelf

Vic's radio is a quest item in Fallout 2.

This hand-held radio doesn't work but it looks as though it's still in pretty good condition. Some of its parts could probably be salvaged for use in other radios.

This damaged 2043B radio can be found in Vic's house in Klamath. The radio cannot be used as a regular radio, and can only be used (by giving it to Vic) to help secure his freedom from Metzger.