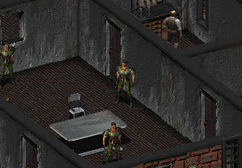 “Okay, fine! You can talk to him, but that's it! He's not stepping a foot outside that room. Got it? Now beat it!”

Vic's guard is a character employed by Metzger. He guards Vic in the Den's Slaver's Guild in 2241.

Vic's guard appears only in Fallout 2.

Retrieved from "https://fallout.fandom.com/wiki/Vic%27s_guard?oldid=3351486"
Community content is available under CC-BY-SA unless otherwise noted.