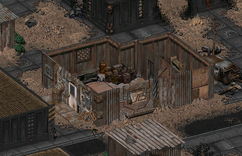 Vic's is a building in Klamath.

It is the home of Vic the trader. However, when Vic informed Sulik that he had information about the slavers who captured Sulik's sister, he found the house empty.

In the back room of Vic's there is a shelf with a pipe rifle, some ammo, and the radio needed to help him in his quest.

Vic's appears only in Fallout 2.

Retrieved from "https://fallout.fandom.com/wiki/Vic%27s?oldid=3135218"
Community content is available under CC-BY-SA unless otherwise noted.