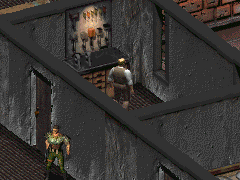 “Dad, you can barely tie your shoelaces, much less repair anything with moving parts.”— Valerie to Vic

Vic the Trader is a wasteland trader who works among the tribes of northern New California and the first person the Chosen One is sent to track down in 2241.

An older man with a prominent gut, Vic is one of the traders who makes his livelihood trading with tribes on the Oregon/California border. He hails from Klamath,[1] where he has a small home built out of scrap and specializes in pre-War technologies.[2] His reputation among the tribes makes him a popular point of contact for those in need, such as Sulik. However, Vic's information on the whereabouts of Sulik's sister proved to be outdated, making the tribal view the merchant with wariness bordering on hostility.

Vic's rounds took him as far as Vault City,[3] where he had an affair with a Vault City Citizen. Valerie was born of it, though the relationship was not built to last. Vic eventually started to refer to Val's mother as the Desert Viper[4] and started traveling outside Vault City, until he eventually disappeared altogether from their life. Yet it seems there was a bit of passion left between them, as should Vic learn of her death, he is still saddened, a bit.[5]

That remnant of a feeling did not stop him from seeking solace in the arms of Jenny, a prostitute from the Dunton-run "Bathhouse" in Klamath.[6] Just before he ran afoul of Metzger in the Den, by selling him a faulty radio,[7] he sold a number of Vault 13 water flasks to the tribals of Arroyo. Little did he know that this would kickstart an epic quest that would culminate in the saving of humanity.[1]

Vic appears only in Fallout 2 and is mentioned in the Fallout Bible.

Vic, being a trader, is likely a reference to the chain of Tiki bars named Trader Vic's, the first of which opened in Oakland near San Francisco in 1934.

Retrieved from "https://fallout.fandom.com/wiki/Vic?oldid=3351506"
Community content is available under CC-BY-SA unless otherwise noted.