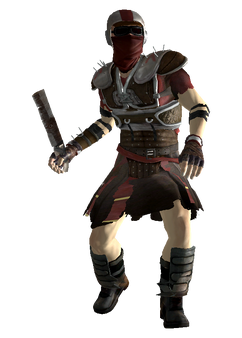 “Word is that the Legion's old timers have shown up. Caesar's veterans from the Red Okie Centuria and what was the Painted Rock tribe.”— Chief Hanlon

Veteran legionaries are veteran soldiers with Caesar's Legion in 2281.

Long time veterans of the brutal campaigns of Caesar's Legion, these legionaries are a force to reckon with. Many of them come from the Red Okie Centuria and what was once the Painted Rock tribe.

Veterans are the highest ranking of the regular Legionaries, exceeded by Caesar's elite centurions, Praetorian guards, and their own officers. They have served in the Legion for around ten years. Due to the extremely brutal nature of life in the Legion, life expectancy for a Legionary is very short, and those Legionaries who have managed to survive in the Legion for ten years have to be exceptionally tough.

Veteran legionaries have exactly the same health and skill level as Prime legionaries, however their Legion veteran armor offers slightly superior protection compared to Legion prime armor, and they are often equipped with better weaponry.

The veteran legionary is based on the Roman Republic's Triarii (singular Triarius). The Triarii were the most experienced and best-equipped members of a Legion and formed the third line of the Legion formation in battle, using spears instead of swords and being used to "finish off" tired enemies.

Concept art, Behind the Bright Lights & Big City
Add a photo to this gallery
Retrieved from "https://fallout.fandom.com/wiki/Veteran_legionary?oldid=3342580"
Community content is available under CC-BY-SA unless otherwise noted.