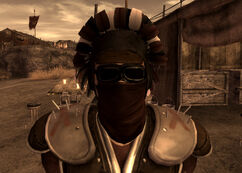 As their name suggests, These decani are some of the most experienced and seasoned of the Legion's officers. Being squad leaders for their fellow Veteran legionaries and are well on their way towards becoming centurions.

Veteran decanus officers actually have exactly the same health and skills as a prime decanus, however their Legion veteran armor offers slightly better protection compared to Legion prime armor, and they are often equipped with superior weapons compared to the Prime decanus.

Concept art, Behind the Bright Lights & Big City
Add an image to this gallery
Retrieved from "https://fallout.fandom.com/wiki/Veteran_decanus?oldid=3307338"
Community content is available under CC-BY-SA unless otherwise noted.