Vertibirds are utilized on the East Coast by the Enclave for transport and fire support. Their weapons include a Gatling laser, a minigun on the left side, a pair of missile launchers, and a bomb rack for mini nukes. Vertibirds can sometimes be encountered on the ground, such as at the Capitol Building in the Capital Wasteland. A cage containing a deathclaw can be found inside.

When engaged in combat, the Enclave officer nearest to the cage will often let the deathclaw loose. It can be fired upon, and the resulting explosion will scatter debris and can cause damage to individuals below. The craft cannot be targeted in V.A.T.S.

A captured one named Pride One was studied and modified by the Brotherhood of Steel between the recapture of Project Purity and Who Dares Wins. The Brotherhood logo has been added to both sides.

A vertibird is seen in the cinematic sequence at the end of Who Dares Wins.

Brotherhood of Steel vertibird landing on mobile base crawler

Taking off in Operation: Anchorage 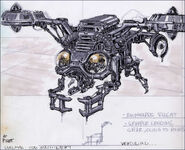