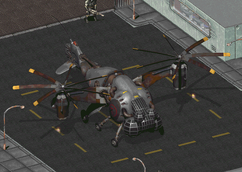 “The XVB02 "Vertibird" is a VTOL ("Vertical Take Off and Landing") craft with an extremely durable armored fuselage and can be armed with a variety of offensive weapons and defensive countermeasures. This is the most advanced aircraft of its kind ever developed, and the military hopes to press them into service by 2085.”— Plaque at the Museum of Technology in Washington, D.C., Fallout 3

Vertibird is a designation for a series of VTOL (Vertical Take Off and Landing) craft. These multipurpose tiltrotor aircraft were developed by the United States military[1] and rapidly became a primary gunship and transport aircraft.

The Vertibird has a heavily armored fuselage and can be outfitted with a variety of offensive weapons and defensive countermeasures, the most common being Gatling lasers, missile racks, and a mini nuke bay. Enclave remnants indicate a combustible fuel source was used to power the aircrafts.[2] It has a winch that can haul several tons of equipment - or a large deathclaw cage.

There are two known versions of the craft used by the Enclave, however only the transport-oriented version is seen in Fallout 2. It has a glass canopy, six legs, a large cargo bay, and seven blades on each rotor to provide extra lift. This was the variant used before the destruction of Control Station ENCLAVE.

Retrieved from "https://fallout.fandom.com/wiki/Vertibird_(Fallout_2)?oldid=3343953"
Community content is available under CC-BY-SA unless otherwise noted.