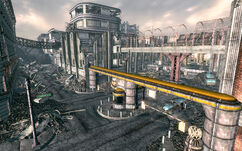 Vernon Square; the "walkway" between the hospital and hotel can be seen on the left.

“There's something about this area. I can't put my finger on it, but just like the Mall, there is an unusually high concentration of super mutants.”— Butcher, about Vernon Square

Vernon Square is a section of Washington, DC. Reilly's Rangers are trapped in this area. Vault-Tec headquarters and/or radiation emitted from a crashed rocket are likely attractions for the unusually numerous super mutants found here. It contains four metro exits.

The district is a square in name only, as in the years leading to the Great War Washington was heavily urbanized and built over. The square (occupied by a now destroyed building) is bounded by Mount Vernon Place, Abernathy Street, Salem Street and Basso Boulevard from the north, east, south and west respectively.

Underworld ghouls have tried to explore the area, but the heavy super mutant presence has driven them away repeatedly, with heavy losses.[1]

The entire outer rim of the location is overall nothing but piles of rubble, chaos and super mutants. In the northern part of Vernon Square through a small alleyway between two buildings (on the map between the sewer entrance and Vernon East/Takoma Park entrances) and guarded by a few super mutants, several locations can be found, including metro tunnels in the direct north-part of the area, the Vault-Tec regional headquarters to the east, as the main building, and Takoma Park/Vernon Square East, which is impossible to get to unless through the Vernon Square East. The real 'hotspot' of the entire area is in fact the middle of Vernon Square, where a rather large Delta IX rocket has crash landed and opened a passage called the sewer, containing a few more super mutants and possibly loot. The entrance into the Takoma Park/Vernon Square Metro is behind the large irradiated hole, past the right of the blue car. The center region is possibly the most devastated part of the location, with a demolished building from the rocket and a toppled radio mast linking the second floor of Our Lady of Hope Hospital to the Statesman Hotel. To the left, and up the stairs are another metro tunnel and Freedom Street station.

“If I wasn't asking for your help, I'd tell you to stay away. It's thick with super mutants. I don't know why. Butcher, our team medic, has always suspected something is in the area they are looking for or being attracted to. The only place worse I can think of is the Mall.”— Reilly

Vernon Square appears only in Fallout 3.

D.C. Journal of Internal Medicine in the radioactive sewer
Add a photo to this gallery

Retrieved from "https://fallout.fandom.com/wiki/Vernon_Square?oldid=3450165"
Community content is available under CC-BY-SA unless otherwise noted.