Fallout Wiki
Register
Don't have an account?
Sign In
Advertisement
in: One Wasteland For All human characters, Fallout 76 Brotherhood of Steel characters, First Expeditionary Force characters,
and 2 more
English

View source
Fallout 76 / One Wasteland For All character

Fallout 76
One Wasteland For All

Doomsday Prepped
“A deserter like me doesn't deserve to just stroll up and pretend all is forgiven. I'll face my redemption in exile.”— Dodge when encouraged to join Fort ATLAS

Initiate Vernon Dodge is a member of the original Appalachian Brotherhood of Steel under Paladin Elizabeth Taggerdy, located at Watoga Towers in Appalachia.

Before the Great War, Vernon Dodge was a Marine veteran. He took a job bagging groceries once his service was finished, describing himself as burned out, with no family or friends. After the bombs dropped, he survived but began to suffer from alcoholism. Years later, a recruiter for the Appalachian Brotherhood of Steel found Dodge and convinced him to join, giving him a "second lease on life, and maybe even civilization."[1]

At some point, Dodge (who had achieved the rank of initiate) developed a friendship with a younger member of the Appalachian Brotherhood. However, the kid had "a lot more stick than carrot," suffering a nervous breakdown and going AWOL in the night. Initiate Dodge saw it as his duty to track him down, before anyone like Senior Knight Wilson would notice that the kid had gone missing. By the time Dodge caught up with him, they were both completely lost, a day's distance away from Appalachia and unable to gather their bearings. While they were lost, the two were attacked and captured by a group of raiders practicing slavery. Dodge spent the next decade enslaved, fighting in arenas and killing opponents without mercy, so that he would not end up as a corpse on a cold floor. Over that decade, he lost an eye (and now wears an eyepatch), and his young friend died.[2]

Dodge was eventually brought to the Watoga Civic Center, another arena run by Sargento's gang. Because he was so close to home, Dodge's anger boiled over. He strangled his handler with a slave collar and "ran like hell" to escape. A search party was sent to recapture Dodge, but he managed to escape, albeit with a bullet in his leg, giving him a limp.[2]

Because of his unwitting desertion, Initiate Dodge was ultimately one of the few surviving members of the Appalachian Brotherhood, who were virtually wiped out by the Scorched. Once he was free, he returned to find almost all of his comrades dead.[3] He went back into hiding, taking residence in Watoga Towers, and documenting his accounts for approximately three weeks, taking note of certain occurences on a terminal. He has only recently re-emerged with the Brotherhood First Expeditionary Force's arrival from New California, seeking to establish a groundwork to support them.[4]

Breaking Radio Silence: The player character is prompted to investigate a grisly scene in Watoga, where they find a note left by Initiate Dodge, who has set up base at Watoga Towers.

Although Dodge will equip a special ops suit when he arrives at Fort Atlas, his transmission image during Daily Ops will not change to reflect this.

Vernon Dodge appears only in Fallout 76, introduced in One Wasteland For All and expanded upon in Steel Dawn.

Lead level designer and product owner of Daily Ops Steve Massey created the initial concept for Dodge, though a different quest designer crafted Dodge's appearance and wrote his character. Massey asked for a "badass grizzled chain smoker" in the design, and later joked that he may have mentioned the 1996 film Escape from L.A., whose protagonist, Snake Plissken, bears a strong resemblance to Dodge.[Non-canon 1] 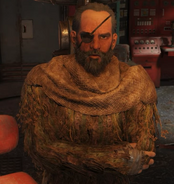 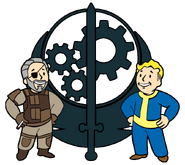 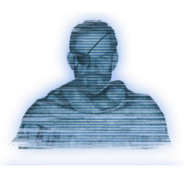