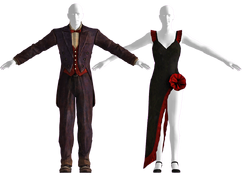 Vera's outfit is a semi-unique piece of clothing in the Fallout: New Vegas add-on Dead Money.

Vera's outfit is a black evening dress with red trim, formerly worn by actress Vera Keyes before the Great War. If the Courier is male, it appears as a tail coat with the same color scheme.

The outfit enhances the wearer's personality, giving a boost to Charisma and raising both Barter and Speech skills.

The outfit also has a DT of 2.

Executive suites - Two copies of the outfit can be found in Vera's apartment; one on her corpse in the corner of the room where Christine is found, and the other in a wall safe near the hotel vault elevator. 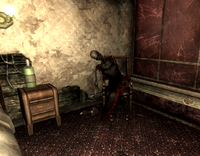