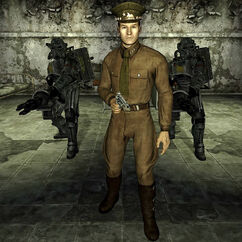 “Good. "In hoc signo taurus vinces." Report to Legatus Lanius immediately - he'll brief you on the plan of battle. Come back victorious, or don't come back.”— Caesar

Veni, Vidi, Vici is an achievement/trophy and final main quest in Fallout: New Vegas if you choose to side with Caesar's Legion.

Caesar tried to capture Hoover Dam before, but this time his Legion has the advantage and will push the New California Republic, and anyone else who opposes them, out of the Mojave.

First, to initiate the quest, the player character must have finished Arizona Killer and by then have access to start "Veni, Vidi, Vici" which is a final test that results in the Legion attaining victory and control of the dam and New Vegas with the rest of the Mojave. The Courier will start off in Legate's camp, and must make their way to the Legate's war tent where Lanius will open conversation with them, before the attack on the dam. After the conversation with Lanius, the Courier will be summoned outside the tent where he will witness dozens of legionaries preparing to attack and then march towards Hoover Dam. The Courier must then follow the path of the legionaries, past the gate from the Legate's camp to the dam.

When Oliver and all the NCR soldiers in the compound are dead, the player character is given the objective to report to Lanius. He will appear before the player character upon leaving the compound, congratulating the Courier on seizing the dam for the Legion and telling them they will be rewarded for winning the Mojave. The ending slideshow then plays.