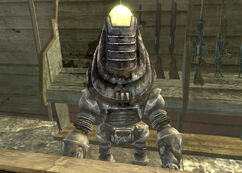 “Welcome sir or madam, do you wish to purchase something?”

Vendortron is a protectron manning the Gun Runners kiosk outside of Freeside in 2281.

Vendortron is a Protectron that sells weapons and ammo for the Gun Runners. According to the Vendortron, the kiosk was built around it in order to deter theft and assault. As such, the Vendortron and its stock are invulnerable.

The store has five inventory tiers (the inventory is random and may not include all weapons listed below):

On a terminal inside the Gun Runners factory, it is suggested that the Vendortron's name be changed from Vendortron to an actual name "like Bob. We're not calling it Bob" which is a reference to the 2000 post-apocalyptic science fiction film Titan A.E.

Retrieved from "https://fallout.fandom.com/wiki/Vendortron?oldid=3456551"
Community content is available under CC-BY-SA unless otherwise noted.