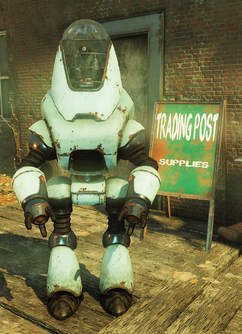 “You should take your survival into your own hands. Stock up on supplies.”

Vendor bot Wallace is a protectron operating at the Berkeley Springs station in Appalachia in 2103.

Vendor bot Wallace was originally stationed in Harpers Ferry, with a porch storefront that could be found in the second map-visible street from the northeast edge of town. His location consisted of a veranda with two picnic tables, umbrellas deployed. Wallace walked back and forth in this area at all times of day and night, regardless of the presence of enemies. Wallace later moved to his current location, the train station at Berkeley Springs, which used to be Purveyor Murmrgh's home.[1]

Vendor bot Wallace was stationed at Harpers Ferry at the game's release, but was moved in patch 22, as part of One Wasteland For All.

Wallace will sometimes say, "the U.S. government cannot be trusted. Live free or die." The latter sentence is the state motto of New Hampshire, adopted in 1945.

Retrieved from "https://fallout.fandom.com/wiki/Vendor_bot_Wallace?oldid=3320783"
Community content is available under CC-BY-SA unless otherwise noted.