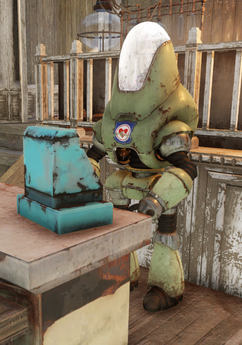 “That Overseer lady said more people would be coming. It's nice to meet you.”

The vendor bot Bob, or volunteer bot, is a protectron operating at the Responders camp in Flatwoods in Appalachia in 2102.

The vendor bot was set up by the Responders to automate trading and record new patients and comments in their absence. The bot transcribes comments and records them to the Responders database. Despite a transcribed comment regarding the bot having run out of all supplies in 2096, the bot can be found by the player character with a full inventory for trading in 2102.

Upon first meeting the player character, the bot will note the arrival that was indicated by the Vault 76 overseer.

Retrieved from "https://fallout.fandom.com/wiki/Vendor_bot_Bob?oldid=3175627"
Community content is available under CC-BY-SA unless otherwise noted.