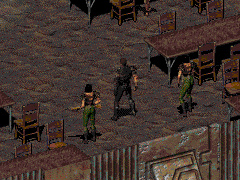 Something strange is happening at the farm northeast of Modoc. Investigate and report back to Jo
Jonny's in the Slag caves. Find a way to get Jonny back home to Balthas
Deliver Slag message to Jo in Modoc
Jo is suspicious of the Slags. Find out about the dead bodies at the Ghost Farm and find out what happened to Karl

“A visitor - how convenient. I've been contemplating on a way to make contact with the surfacers, but now I don't have to worry about that -- thanks to your timely arrival.”

Vegeir is a tall, stately man. His movements are cat-like.[1] He, like his people, were born underneath the surface in order to protect them from the Wasteland. One day, when he was mature enough, he became the Slags' leader. However, as the population's number grew, Vegeir and his people needed contact with surface cities to trade for supplies.

Vegeir appears only in Fallout 2.

Retrieved from "https://fallout.fandom.com/wiki/Vegeir?oldid=3072845"
Community content is available under CC-BY-SA unless otherwise noted.