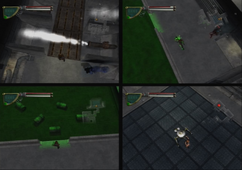 It was likely discovered by Rhombus while seeking a main base of operation for the Texas expedition against Attis and his super mutants. The place appears to be a Vault-Tec facility, that may have been dedicated to the Secret Vault project.

In the game, Nadia completes this course, guided by a paladin hologram, while various people in vault uniforms watch her progress. These people may be the Brotherhood of Steel members wearing uniforms found in this location.

The vault prototype appears only in Fallout: Brotherhood of Steel.

Retrieved from "https://fallout.fandom.com/wiki/Vault_prototype?oldid=3419481"
Community content is available under CC-BY-SA unless otherwise noted.