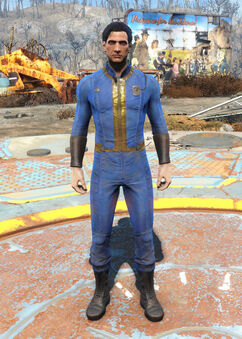 The vault jumpsuit is a piece of clothing in Fallout 4.

This piece of apparel was the required clothing for every vault and is comprised of a light blue jumpsuit with a yellow line around the neck, middle and sleeves. It increases Energy Resistance by 5 and Radiation Resistance by 10 when worn.

The yellow stripe on the suit is actually a gold foil that aids in heat dissipation and works with the suit's integrated biometric scanners.[1]

Vault jumpsuits are worn by the inhabitants of the vault that is represented by the number on the jumpsuit.

There are eight numbered vault jumpsuits in Fallout 4, including the Vault 101 jumpsuit that is not present in the game, the Vault 75 and Vault 95 jumpsuits which are unobtainable without console commands or mods and the Vault 118 and Vault 88 jumpsuits that require their respective add-on.

Vault 81 jumpsuit - Still worn by the inhabitants of Vault 81.

- Originally worn only by the overseer of Vault 118.

There are no lootable jumpsuits in Vault 75.

A child version is worn by the children of Vault 81, which lacks the Energy Resistance of the adult version. If one leaves and comes back, all of the guards and overseers will spawn with a new suit but the other residents will not.

One jumpsuit can be found inside Vault 88 on a Vault 88 steamer trunk near the vault door entrance. The steamer trunk itself contains 10 more and has its inventory refilled as soon as one exits the vault. 20 more can be found in the workshop inventory. Lastly, the Legend of Vault 88, a unique version of the jumpsuit, is rewarded upon completion of Lady Luck. Unlike all other vault jumpsuits, Vault 88 jumpsuits (with the exception of Legend of Vault 88) have no value.

There are no lootable jumpsuits in Vault 95, only tattered remains on skeletons.

Jumpsuits of this kind do not appear anywhere in Fallout 4 and can only be obtained through the use of console commands.

A total of three Vault 111 jumpsuits can be acquired

One jumpsuit can be found at the entrance to Vault 118, on the receptionist's desk. Another one is worn by the Vault 118 overseer, but can't be taken.

The Damage Resistances of vault jumpsuits can be upgraded at any armor workbench. However, they cannot be upgraded with ballistic weave.

Back of a folded jumpsuit 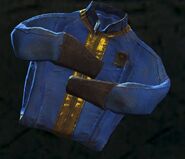 Front of a folded jumpsuit 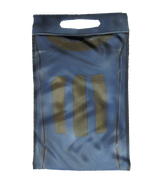 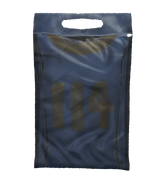 High render
Add a photo to this gallery

Retrieved from "https://fallout.fandom.com/wiki/Vault_jumpsuit_(Fallout_4)?oldid=3440771"
Community content is available under CC-BY-SA unless otherwise noted.