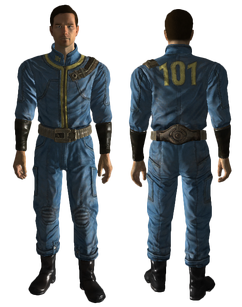 A rugged jumpsuit variant designed for heavy use among Vault-Tec machinery and infrastructure. Rather than extruded rubber, the suit uses a combination of denim and natural leather,[1][2][3] combined to create a particularly rugged piece of equipment. The suit is less form fitting than other jumpsuit variants, but provides a good deal of comfort. Like other versions, it's a single-piece uniform, with a zipper down the front, leather armguards and spacious pockets on the waist and thighs. Reinforced elbows and knees give it extra durability under heavy use, with the interface port over the left breast used for a variety of purposes. Depending on the job assignment, the jumpsuit is designed to accommodate a variety of belts, including simple leather bands for children, rugged multi-purpose belts for general use and specialized equipment for utility, lab and security work.[4][Non-game 1]

There is a jumpsuit for every vault that appears in Fallout 3, although two of them are only found in the game files. It provides a Damage Resistance of 1 as well as a bonus of +2 to Speech and Melee Weapons, and can be repaired with other vault jumpsuits.

Two variants of the Vault 101 jumpsuit can be found in the game files for Fallout 4. However, it cannot be found anywhere in the game and can only be obtained on PC by using console commands.

Adam Adamowicz described their inspiration for vault suits in the Conceptual Design blog.[Non-canon 1]