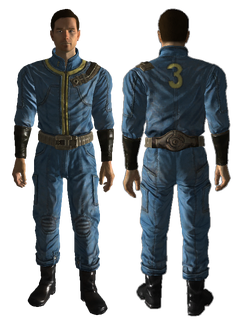 Vault jumpsuits are articles of clothing in Fallout: New Vegas.

A rugged jumpsuit variant designed for heavy use among Vault-Tec machinery and infrastructure. Rather than extruded rubber, the suit uses a combination of denim and natural leather,[1][2][3] combined to create a particularly rugged piece of equipment. The suit is less form fitting than other jumpsuit variants, but provides a good deal of comfort. Like other versions, it's a single-piece uniform, with a zipper down the front, leather armguards and spacious pockets on the waist and thighs. Reinforced elbows and knees give it extra durability under heavy use, with the interface port over the left breast used for a variety of purposes. Depending on the job assignment, the jumpsuit is designed to accommodate a variety of belts, including simple leather bands for children, rugged multi-purpose belts for general use and specialized equipment for utility, lab and security work.[4][Non-game 1]

All jumpsuits with the exception of those from Vault 11 have no Damage Threshold, but provide a bonus of +2 to Speech and Melee Weapons and can be repaired with other vault jumpsuits. The Vault 11 variant has a DR of 1. The Vault 3 utility jumpsuit adds +5 to both Lockpick and Repair.

The Vault 24 jumpsuit was not intended to be a part of the game and remains unused in the game files.[Non-canon 1]

Displayed on the ground at Vault 22 dwellers' guard camp

Sarah Weintraub contemplating the tiny terminal in her Vault 21 jumpsuit

Ricky trying to get somewhere fast in his Vault 22 jumpsuit

Michael Angelo hard at work in his Vault 21 jumpsuit

Horowitz enjoying the fresh air in his Vault 34 jumpsuit

Security keeping the vault safe in their Vault 34 security armor