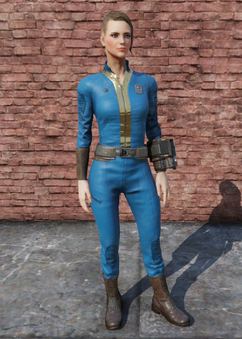 The Vault Tec University jumpsuit is an underarmor in Fallout 76.

The Vault Tec University jumpsuit is visually identical to standard Vault jumpsuits, except that instead of a vault number on the back there is a Vault-Tec University golden VT emblem.

The plans for the jumpsuit can be reliably found in the back of a pickup truck to the east of Pioneer Scout lookout. However, they can be found at any random armor plan spawn.

A fair amount can be found on shelves inside of Vault-Tec University.

Retrieved from "https://fallout.fandom.com/wiki/Vault_Tec_University_jumpsuit?oldid=3221558"
Community content is available under CC-BY-SA unless otherwise noted.