Vault Mission: Dead in the Water 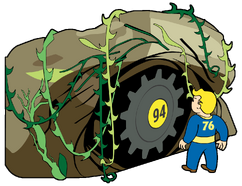 “Control the flooding before Vault 94 is lost forever!”

Vault Mission: Dead in the Water is a raid mission in Vault 94 in the Fallout 76 update Nuclear Winter.

Upon arrival at Vault 94, the player character and their team must enter the Vault. Once they are in the outer cave, the team leader must unlock and open the Vault door, in order to progress further. Once the door is open, the team can walk through it to enter the instance. When the entire team has loaded into the main interior, the team leader initializes the maintenance procedure at the Vault 94 guest terminal, selects a difficulty, and prepares to start the mission.

After the Vault door closes, a blue bulkhead door will open, allowing access to the rest of the Vault. The party must run down a few sets of stairs, and pass through the screening room in order to reach another blue bulkhead door, with a button to the left of it. This will allow access the next stage. Beware, as this stage is where the party is introduced to some of the new, dangerous creature variants found exclusively in Vault 94.

After the button has been pressed, the bulkhead door will open, granting access to the atrium. In the atrium, two mirelurk queens will appear, as well as numerous mirelurk crabs and feral ghouls. The party is tasked with repairing pipes throughout the atrium. The number of pipes required will change depending on the difficulty. Also note that each repaired pipe will add precious time to the countdown (5 seconds if on expert or 10 seconds if on standard difficulty). The pipes will almost exclusively be found in the corners of the atrium. Once all the required pipes have been repaired, the draining process will be initiated for the residential wing. Two flashing lights will appear next to a bulkhead door to the far left of the atrium. Once the draining process has been concluded, a button will activate and the door will be available to be opened.

Once in the residential wing, the party will be faced with two tasks: repair pipes and recover the Vault maintenance engineer's keycard. The pipe repairing is fairly standard, and will require a bit of searching. A wise strategy would be to have one player character hunt for the keycard, while the others repair pipes and perform pest control. To locate the keycard, a party member must go through the maintenance tunnels (found to the left upon entry) and reach the end, where there will be a drop-down to the Vault common room. Once a player character has read the maintenance logs in the common room terminal, the party must then hunt down 3 sets of keys. The first is found in a random location in the common room. Once the first key is found, the player must enter the room which they have the key for, and find the next key. There are 3 rooms, and the order in which you must enter them is randomized. However, all 3 room keys must be found in order for the maintenance engineer's keycard to be obtained. Also, there will be the option to lockpick into the first room in the sequence in order to skip the preliminary scavenger hunt. The first required room will vary with each run. In the final room that was unlocked, there will be a red keycard placed somewhere in the room. After the keycard is found, the player character who picked it up must return to the common room, where the maintenance engineer's room will be located. Using the keycard, one can enter the room. To progress, the locked terminal must be unlocked. With rank 2 in the Hacker perk card, the player character can hack it themselves. However, this is time consuming. If one manages to locate the terminal password (also in the locked room), it can expedite the process significantly. After terminal access has been obtained, one must print out the reactor and pump code sheets. Once the codes have been obtained, and the pipes have been repaired, the party must wait for the engineering wing to drain. After drainage has been completed, a bulkhead to the far right of the wing will be usable, allowing access to the next section.

Once the entire party has gone through the bulkhead, two and a half minutes will be added to the countdown and the timer will stop. The room one finds them self in is small, however one of every workbench is available, allowing armor and weapon repair. However, there is no stash box. Once the team is prepared, a door to the right of the first entrance must be opened.

The team will exit into a medium-sized room with two Vault reactors. The team is tasked with repairing pipes and restarting the reactor. A player character must rush and initialize the restart procedure on the reactor control terminal, to the back of the room, on the second floor. This will begin a complicated process that is time-sensitive, regardless of difficulty. The group will be required to perform 5 separate tasks that will be picked at random. Each task will be under a time limit, which varies with each one. If the task is incomplete when the timer runs out, the party must restart the entire process. If all 5 tasks are completed, the 6th task will be to press the emergency restart button. This can be located to the right of the room, on the second floor. Once it is pressed, and all the pipes have been repaired, draining will start for the utility and agriculture wings. Once draining is complete, the party can continue through a bulkhead to the back of the room, on the bottom floor.

Upon entry into the utility wing, the party must continue through a mud tunnel, repairing pipes as they go. At the end of the utility tunnel, there will be a drop down to the agriculture wing. This wing is a large flooded chasm, filled with glass greenhouses and mirelurks. The pipes in this room are necessary for a timed completion, so it would be wise to have a teammate stay behind to ensure that every pipe is repaired, while the others go to complete the next step.

Upon entry, the group is tasked with restarting the flood control pumps. This requires typing 4 codes into 4 different keypads. In order to do this, one player character must be typing in the codes manually from the pump code list given in the residential wing. Once all 4 codes have been typed in, and the required pipes have been repaired, the party will be tasked with defeating the Vault 94 strangler heart. It will be above a bulkhead door, on the wall to the far end of the room. The strangler heart can only be harmed if its petals are open. However, it will only open its petals if a player character is near enough to it. This can be risky as the heart spews out a highly radioactive gas that can kill unprotected players very quickly. In order to defeat the heart, one player character must be constantly getting its petals to open, while the others attack the heart and the other creatures it calls as reinforcements. This can be difficult as the Vault 94 strangler heart has an enormous health pool. However, once it is defeated, the vines that were covering the bulkhead door will be lifted, and the party can continue on to the final stage.

Once the team has gone through the bulkhead, one player character must activate the emergency flood procedure on the white terminal in the center of the control station. After a brief period of waiting for results, the raid will be over, and the team can reap the rewards. Note the Vault 94 steamer trunk with a guaranteed 3-star legendary item. After all is said and done, the team can either fast travel away or wait a few minutes to be automatically kicked out.

Retrieved from "https://fallout.fandom.com/wiki/Vault_Mission:_Dead_in_the_Water?oldid=3497795"
Community content is available under CC-BY-SA unless otherwise noted.