The Vault Dweller of Vault 76, as a group referred to as Vault Dwellers[1] and Seventy-Sixers,[2] and individually as Seven Six,[3] among other designations, such as Ressies, Vault Residents (or simply Residents)[4][5] and Vaulters[6] are the player characters in Fallout 76. On October 23, 2102, 25 years to the day since the Great War, they emerged from their Vault for Reclamation Day and began exploring and recolonizing Appalachia, eventually reclaiming the region. One last Dweller emerged from the Vault a year later,[7] having nearly depleted the Vault's supplies.[8]

Individuals from Appalachia and various parts of the United States with different ethnicities, religions, and sets of unique skills. Those individuals who were selected to enter Vault 76 represented the "cream of the crop" of the United States' citizens. Compared to the other inhabitants of America, they were highly accomplished and intelligent and possessed competitive personalities. Each was chosen for their unique skills and temperament, making them the "country's best and brightest." This included aerospace engineers and nuclear engineers, Nobel Prize winners, university lecturers, lawyers and professors, physicists, war veterans, businessmen and women, high donor graduates, mathematicians, and athletes. This made managing them a challenge for the Vault's staff.[9]

As an incentive to maintain order in their unique living accommodations, several awards were given in the Vault, evident by the display case in the quarters for various achievements. These include volunteering for the canned mystery meat experiment when no one else would eat it, the isolation program, the Vault hall monitor award, Best Hair award, and Vault dweller of the year award. They also trained for when they would emerge using the educational Vault films such as Let's Work With Others, The Power of the Atom, Laying the Cornerstones and Atomics for Peace. As part of their wasteland survival, they learned to use the C.A.M.P. They spent their lives in the Vault using their skills for the "betterment of the Vault." Many were also golf and instrument players, as well as avid readers, board game players, and skiers. Their overseer taught them about skills they would need to survive, such as how to use their Pip-Boys.

After 25 years in Vault 76, the overseer would receive the activation notice to open the Vault and all inhabitants would enter Appalachia as part of Reclamation Day. Before release, these individuals would be equipped and trained in the operation of the C.A.M.P. device for settling uninhabited areas. Given a map to explore their surroundings accurately and allowed to leave with their Pip-Boy 2000 Mark VI.[10] As per procedure (and against the wishes of the security team), they would not be armed and only lightly provisioned exiting Vault 76. Besides the equipment given to them to settle Appalachia, they would need to procure weapons and other resources from scavenging.[11][12] During this time, the individuals came to learn of the stories of the factions who had previously inhabited the region, eventually going on to take down the scorchbeast queen, responsible for the Scorched Plague that had afflicted the region.[13]

Taking control of the silos

Throughout their journey in Appalachia, the individuals helped Rose, a robot with various tasks. Eventually, their search led them to an Enclave-controlled facility in which they met an AI, MODUS. With MODUS' assistance, the individuals learned how to launch nuclear weapons throughout Appalachia, a method that would help lure the Scorchbeast queen from its underground hive so it could be defeated.

By 2103, these individuals reunited with their overseer in her house in Sutton. With her advice, they took part in assisting both the Settlers and the Raiders that had come back to Appalachia in reclaiming the region by making a vaccine to the Scorched Plague by using a sample of their blood.[14] After assisting the overseer at the Kanawha Nuka-Cola plant, they helped to distribute a vaccine to Meg Groberg at the Crater and Paige at Foundation.

The individuals learned from their Overseer about the true rumored fortune hidden somewhere in the region: the country's gold reserves stored within Vault 79.[15][16] After learning about both the Raiders and the Settlers, the individuals broke into Vault 79 with one of the two factions and found the gold in order to help revitalize Appalachia using a new currency.

By 2104, these individuals found themselves helping the Brotherhood First Expeditionary Force in deciding their future mission objective after further conflict arose between Paladin Rahmani and Knight Shin over whether to protect the people of Appalachia or continue to recover and protect pre-War technology.

The Vault Dwellers of Vault 76 appear only in Fallout 76. 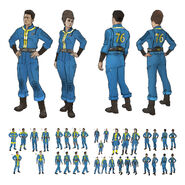 Concept art of the Vault jumpsuit

A Vault Dweller in the teaser trailer

A Vault Dweller with their Pip-Boy

Vault Dwellers receiving a lesson from their overseer

The Vault Dwellers embracing just before they exit on Reclamation Day

A Vault Dweller speaking to Isela Mejia and Lacey Drummond

A couple Vault Dwellers exploring Clarksburg in the Wastelanders trailer

A party of four Vault Dwellers

Vault Dwellers in their power armor