The Vault Dweller is the player character in Fallout.

The player may also choose one of three pre-made characters with their own backstories to be the Vault Dweller: Albert Cole, Max Stone or Natalia Dubrovhsky. Despite this, the Vault Dweller in the series canon is a 20 year-old man during the first game's events.[Non-canon 3]

The player can select their gender, age (between 16 and 35), and playthrough. The article is written in a gender-neutral manner to reflect this.

The Vault Dweller was one of hundreds of inhabitants of Vault 13. Born in 2141,[Non-canon 2] they were raised by the community and robotic caretakers, leading an unremarkable life in the Vault. Their journey began when the water-purification chip the Vault relied on to create fresh water broke down. Without spare parts or the possibility of a workaround system, the overseer had to send an individual outside the Vault to seek a new one out. With no alternative, the Vault 13 overseer gathered everyone between certain ages, healthy enough to venture out, and made them draw straws. The Vault Dweller pulled out the short one and was sent out to find a replacement chip.[Non-canon 2] They left the Vault the next day, on December 5, 2161.[Non-canon 4]

The Vault Dweller struggled for the first few days, fighting off rats and the elements. With only the location of Vault 15 to guide them, they started out eastwards. On their way, they happened upon the small settlement of Shady Sands. The Vault Dweller aided them and earned their trust. Tandi and Aradesh in turned helped them, sharing their knowledge. After hiring Ian, the Vault Dweller continued on to the buried Vault. Exploring the ruins, they realized that it would not help as the control room and the water chip were buried under tons of rock, so they moved on.[Non-canon 2]

After fighting and saving Tandi from the Khans (inadvertently paving the way for the New California Republic's rise),[7] their travels took them to Junktown, where they met Dogmeat, the loyal mutt who would be their most trusted friend for the time they were together.[Non-canon 2]

The Vault Dweller continued on to the Hub, the largest city in post-War California. Bigger than both Junktown and Shady Sands combined, it was the most prosperous place they had seen outside the Vault, yet they felt that the citizens of the metropolis had no life, leading a desolate existence under the shadow of the powerful merchant companies. These same companies would help the Vault Dweller, however, providing water to the Vault and extending the deadline for finding the water chip.

A clue they acquired in the city led them to Necropolis, the city of ghouls. There, they fought the super mutants and the Vault Dweller was devastated to lose Ian, killed by a mutant's flamethrower, burning him to death. The memory of his burning flesh would forever be etched into their mind. However, Ian's sacrifice was not in vain, as the Vault Dweller found the water chip and returned with it to Vault 13.[Non-canon 2]

The happiness of their return was marred by the report they logged with the archives. The overseer ran calculations and determined that the mutations witnessed by the Vault Dweller at Necropolis were too regular to be the product of random chance. He also berated them for sending the water caravans to the Vault, in doing so, revealing the location of the shelter to the wasteland. Combined with their knowledge of the mutants, the overseer sent the Vault Dweller out again.

This time, they were tasked with wiping out the super mutant threat. In hindsight, the situation was revealed to be exploitative of the Vault Dweller, but at the time they soldiered on, loyal to the Vault.[Non-canon 2] They picked up the trail, heading to the Hub. In the process of unearthing clues, they met Decker and discovered the shady Underground he led. Though they tried to manipulate the Vault Dweller, the hero of the Vault managed to turn the tables and use the criminals instead. In the process, the Vault Dweller also saved Brother Jonathan from Decker's goons in the city's old town.[Non-canon 2]

After leaving the town, they journeyed to the Brotherhood of Steel. Figuring they would have the knowledge needed, the Vault Dweller tried to join them, only to be sent on a fool's errand to the Glow. Faced with the horror of the atomic devastation, they refused to break and recovered the ancient Brotherhood disk sought by the reclusive order. Shocked to see them returning alive and well, the Brotherhood shared their knowledge and technology with them. They proceeded with the information from the Brotherhood, onward to the Boneyard, making a short stop at Necropolis to visit old friends. As soon as they entered the city, they realized that something went wrong. The super mutants had attacked the city shortly after they left. A single ghoul survivor revealed that they were looking for the Vault Dweller, right before he died.[Non-canon 2]

The ruins of Los Angeles stretched forever, skeletons of buildings baking in the hot desert sun. Within the city, they found many enemies and a few friends, learning more about the nature of the super mutants and the true foes. On March 3, 2162, they entered the Cathedral.[Non-canon 5] Stealing the robes of one of the Master's servants, they penetrated the depth beneath the monumental building. In the old Vault, walking among the misshapen ones, they confronted the most terrifying sight yet: The Master. All evidence of the Master and his plan was incinerated shortly afterward in nuclear fire.[Non-canon 2]

Only one target remained, the vats. On April 20, 2162,[Non-canon 6] The Vault Dweller invaded the Mariposa Military Base with support from the Brotherhood and Dogmeat, fighting their way to the heart of the facility. Though one of the forcefields claimed the life of Dogmeat, the Vault Dweller managed to trigger the self-destruct sequence, destroying the vats along with the facility. With their destruction and the fall of the Lieutenant, the Unity was no more and they could return to Vault 13 a hero.

Return to the Vault

On May 10, they returned, and the overseer met them outside the Vault door, thanking them for their service, but then exiling them indefinitely. The overseer claimed it was all in the name of protecting the Vault. Bitter and angry, the Vault Dweller turned their back on the Vault and never looked back. A group of Vault Dwellers, disgusted with the overseer's decision, also left, led by Lydia, Theresa and Lyle. They were never heard from again, leading the remaining dwellers to remove the Vault 13 overseer from power and abolish the position of overseer.[Non-canon 2][Non-canon 7]

Stricken with grief, the Vault Dweller wandered the desert surrounding the Vault. They lashed out for a time, but slowly came to terms with the exile, admitting the overseer may have made the right choice, but never forgave him for his betrayal. They cut all ties to the Vault, removing their jumpsuit on May 12 and never wearing it again.[Non-canon 8] Soon after, they came upon the group of dwellers that left Vault 13. The Vault Dweller helped them survive in the harsh wasteland, saving their lives in the process.[Non-canon 2]

On July 10, the Vault Dweller and their group, which was now comprised of regular wastelanders that had joined along the way, headed north. In the inaccessible canyons of southwest Oregon, they founded a village. The Vault Dweller deliberately chose a location beyond a dry valley, surrounded by barren lands that would deter visitors.[Non-canon 2] Scouts were sent at first towards the old Vault, but gradually, that stopped in favor of strengthening the village.[Non-canon 9][Non-canon 10]

On August 18, 2167, the village was completed and named Arroyo.[Non-canon 11] The Vault Dweller, now the elder of a tribe, taught their followers the basics of hunting, farming, and other skills.[Non-canon 10] They also taught them the basics of engineering and science, so that they could maintain their homes and craft more to survive. And in addition, they found love: Pat.[Non-canon 2] On October 2, 2188, they were blessed with a daughter, the future Arroyo elder.[Non-canon 12] Twenty years later, on January 16, 2208, the Vault Dweller left Arroyo, leaving behind their Vault suit, folded on the bed, and their memoirs.[Non-canon 13]

The Vault Dweller was 67 years old by the time they left the village. The villagers presumed their leader had perished, but others say they were "taken by the sky spirits," while others say that the Vault Dweller knew it was time to allow the new elders to come into their own.[Non-canon 14]

Their legacy would live on in Arroyo and in the form of the New California Republic. President Tandi explains to the Chosen One that the statue is to honor the Vault Dweller for their role in scaring off nearby raiders, allowing the town to be properly established. She mentions that at the time, she did not believe their origins of Vault 13, and subsequently her father and friend died attempting to find it.[7]

The Vault Dweller appears as the player character in Fallout, and is mentioned in Fallout 2, Fallout 3, and Fallout: New Vegas. 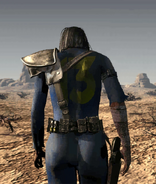 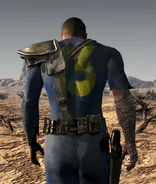 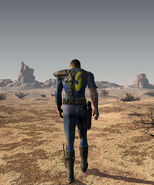 Albert Cole, a possible identity of the Vault Dweller

Natalia Dubrovhsky, a possible identity of the Vault Dweller 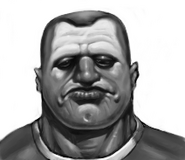 Max Stone, a possible identity of the Vault Dweller

In an Fallout 2 intro slide

Sacred head of the Vault Dweller

The vault dweller's memoir description of their fight with the Master, in the manual