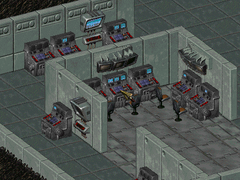 Vault City travel log is a holodisk in Fallout 2.

This travel log is found in the bottom level of Vault 8, taken by activating one of the consoles in the square area. The player character must insert their Pip-Boy into the slot they see (done in 'dialogue' with the computer, Perception must be 7 or greater). It speaks of the Pip-Boy doing strange things and was long overdue for an update. The update does nothing more than load the travel log which adds many locations; the Pip-Boy itself does not change.

WARNING: If Vault Citizens find it necessary to travel
outside of Vault City, they should keep the following
list of items on their person: