Play sound
All Clear Signal.ogg
“This utopia is free from crimes and other sociological ills that inflict the other communities in Northern California. It has existed independent since its emergence from Vault 8, and maintains a thriving economy based on exporting medical technology to Outsider communities in Northern California.”— Vault City travel log

Vault City is a location in California, established by the inhabitants of Vault 8 after the Great War.[1] Vault City can be found twenty-one squares east and four squares south of Arroyo.

Vault 8 can be traced back as the origins of Vault City. In 2091, 14 years after the Great War, the Vault received the all-clear signal and the Overseer ordered the opening of the Vault doors.[2][Non-canon 1] While many citizens were responsible for monitoring the surface sensors,[3] the "all-clear" signal was sent by the Enclave,[Non-canon 2] as well as detection from radiation sensors on the surface.[Non-canon 3]

In the following years, Vault City was built through the hard work and suffering of many people.[4] By using their only GECK, combined with power from Vault 8's fusion generator, they created fertile grounds and buildings.[Non-canon 1] In 2092, Richard Moreau was exiled for murder. The details of the murder are unknown and judging from the hypocrisy filling Vault City, the entire incident is questionable.[Non-canon 4][Non-canon 5] In 2101 the overseer retired and a Council of Citizens was established. The Council appointed the initial First Citizen.[5]

Years after residents of Vault 8 emerged, the shelter was used primarily as a medical center, the best available in post-war America. From the beginning Vault City is one of the most advanced factions in the wasteland, possessing cutting edge medical technology, allowing it to mass-produce medical supplies and chems (such as super stimpaks) as well as perform radiation removal and sophisticated surgical procedures, including replacement of lost limbs and organs via cloning[6] and grafting armor plating to one's skeleton.[7] It is the only place that has information about the combat implant schematics. Vault City quickly became an important part of Big Circle caravan trail.[8][9]

In 2232 Leonard Boyarsky was exiled for murder and unauthorized research. The research allegations revolved around some tampering with the pregnancy cycles in the Auto-Doc that apparently put all of Vault 8 in danger, but the details were deleted from the Vault 8 computer.[Non-canon 6]

The Vault City guard is the direct descendant of the Vault security team - a Vault police force. Vault City guards act as a universal military force, enforcing the law within the town, defending it, and securing Vault City's perimeter. While small, it is extremely well trained and equipped, able to deal with any threats when supported by laser turrets of the city, save for an all-out siege.

Captain of the Guard is a title granted by the First Citizen of Vault City to exemplary citizens that have gone above and beyond the call of duty to protect the city's interest and independence. In essence, it is the highest military rank one can hold, giving them full authority over the military might of Vault City.

Gecko is a neighboring community of Vault City, who managed to reactivate the nuclear power plant that the town was built around.[Non-canon 7] The plant was in a serious state of disrepair, leaking waste into the local groundwater, which eventually made the entire reservoir, from which Vault City drew water for their wells, poisonous.[10][11] Offers of inclusion within the NCR were repeatedly declined, with Vault City preferring to stay independent. With no progress being made on the diplomatic side, the NCR Congress approved a secret initiative intended to force Vault City to join.[12] The person selected to carry out this campaign of terror against Vault City was John Bishop of New Reno, who later employed mercenaries to act as raiders and regularly attack Vault City to eventually force it into NCR's hands.[citation needed] In 2239 Thomas Moore, an NCR agent came to Vault City and became one of its citizens. After one year he changed politically, actively seeking to convince the Citizens of Vault City to turn to democracy.[13][14] As a result of his actions he is treated like an idiot, rather than a citizen. Not one citizen takes his words seriously about democracy.[15] Although his demagogy was not effective, he did manage to steal some Vault City technology.[Non-canon 8]

In February 2241 Vault City rejected offers of an alliance with both the Bishop family of New Reno and the NCR.[Non-canon 9] In March, raider attacks on caravans to Vault City begin.[Non-canon 10] The NCR has been getting more aggressive in their attempts to get Vault City to join the Republic, telling Vault City Councillors, if they were to join, the NCR would be able to defend Vault City from the raider attacks.[16] John Bishop under pressure from the NCR, tried to get a current roster of all Vault City's guards. So he could see if he could "get" to one of them with drugs or other "convincing," which he ultimately failed.[Non-canon 8]

One of the key limiting factors of Vault City was the fact that its nuclear reactor, housed in Vault 8, was not designed for the strain of powering an entire settlement. By 2241, it was operating at peak capacity, making further growth impossible. The only way to prevent that would be to source power from another location, such as Gecko.[17] Without additional power, Vault City's reactor would burn out within 15 years, dooming the settlement.[18] Despite their antipathy to the outside, the city maintains regular caravan routes with other cities, trading its superior medical technology for raw materials, fuel, mechanical equipment, and other items.[19][20] Despite being warned to "avoid Broken Hills at ALL costs," Vault City and Broken Hills maintain trade relations, trading uranium for medical supplies (in particular Rad-X and RadAway).[21]

The way to become a Citizen of Vault City is to be born into it. Personal intervention by the Senior Councilor (in 2241 McClure) or the First Citizen (in 2241 Lynette) can grant non-citizen citizenship (though this is never done lightly). In addition, non-citizens can take a citizenship test (administered by the Proconsul; Gregory in 2241), which is intentionally designed to be so difficult as to be virtually impossible by someone not of extraordinary intelligence, perception, and luck. The test is so difficult that the majority of born citizens would fail it were they to take it. Some of the subjects covered by it include advanced mathematics, spatial relations, deductive reasoning, and language comprehension. A thorough physical exam is also included.

Day passes are issued to non-citizens, allowing entrance to Vault City. (Examples: slaves, uranium, gold, or gecko pelt traders, diplomats, and non-citizen agents of Vault City.) Day passes allow non-citizen access to Vault City proper during daylight hours (8:00 am until 6:00 pm) but not the original Vault 8 itself. While the customs office is nominally strict in its rules regarding the issuance of day passes, but Skeev is willing to sell false citizenship papers. Perhaps the easiest approach to gain one is to remove one's armor to reveal their jumpsuit before talking to Wallace, who will grant immediate access and advise going to see First Citizen Lynette immediately.

The citizen population (in all departments) was 103 in 2241, with an unspecified number of outsiders residing in the courtyard area.[1] It was small compared to the hundreds of residents that lived in Redding or Broken Hills.[1]

The city is ruled by a Council, led by the First Citizen, established in 2101 after the Vault overseer retired.[5] Their regulations are strict and enforced to the full extent of the law. For instance, no drugs, real alcohol (artificial imitations are legal), prostitution, gambling is allowed within the inner city.[23][citation needed] Non-Citizens, who are servants, are forbidden to even look at the city.[citation needed]

Vault City appears only in Fallout 2 and is mentioned in Fallout: New Vegas.

In Vault 8, the Vault City designer notes are found in a terminal. It reads, "Vault City went through many incarnations. It was designed by Leonard Boyarsky, Jason Anderson, Feargus Urquhart, and Chris Avellone. Scott Everts built the maps, and the brave men who scripted this architectural Frankenstein were Rob Hertenstein and Dan Spitzley. And finally, Eric Pribish nearly gave his life testing the monstrosity that is Vault City."[27] 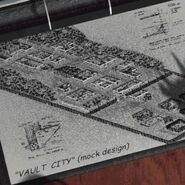