Vault Boy is the corporate mascot of the Vault-Tec Corporation, appearing in their adverts, manuals, products, holotape games and training films. His female counterpart is Vault Girl.

They appear in virtually every released game, and evolved over the years into a symbol of the Fallout franchise in general.

Vault Boy is a registered trademark of the Vault-Tec Corporation under the name of Vault-Man,[Non-game 1] and is used widely throughout game guides and manuals.

Vault Boy often appears in cross-promotions with other corporate products, such as with the Nuka Tapper holotape game, and was also to appear in some issues of the Hell's Chain Gang comic of Hubris Comics, but because of the Great War, the series was never produced.[1]

In the Fallout games, Vault Boy is used to provide an iconic representation of almost all stats (perks, traits, skills, etc.) and items in later games available to the player character, being a generic representation of one's actions and survival, and also appearing in achievements and trophies for Fallout 3, Fallout: New Vegas, Fallout 4 and Fallout 76, as well as the mascot of the Fallout series itself. In appearance, he is a young male cartoon character with wavy blond hair, wearing a Vault jumpsuit. He most commonly expresses a wide grin but has been shown to make other facial expressions as well.

Relationship with the Pip-Boy

Vault Boy should not be confused with Pip-Boy, which is the name of the personal information processor used as a game interface in Fallout, Fallout 2, Fallout 3, Fallout: New Vegas, Fallout 4, Fallout 76 and Fallout Tactics.

Made by RobCo, the Pip-Boy device has its own mascot shown on the plate of the Pip-Boy 2000 series in Fallout, Fallout 2 and Fallout 76 (with pointy ears, red and yellow jumpsuit, red hair). In Fallout 76, the character was given the name Vault Boy 2000. The Pip-Boy 3000 model, created under a Vault-Tec/RobCo joint-venture, does not feature RobCo's own mascot.

While the name of the Vault-Tec mascot (round ears, blond hair, blue, and yellow Vault jumpsuit) is not present in the original games themselves, he was called Vault Man in the Fallout instruction manual. However, for some reason this name was forgotten - it was never used in any of the following Fallout content including games nor by any developers, only Vault Boy was used and became his real name.

According to Fallout developers Leonard Boyarsky[2] (creator of the character) and Tim Cain,[3] he was always referred to as Vault Boy or Fallout Boy, not Pip-Boy. The misconception stems from the fact that the developers of Fallout Tactics (Micro Forté) confused the two and called the Vault Boy - "Pip-Boy" (which even ended up being used also by Chris Avellone when he wrote the Fallout Bible).

The makers of Fallout 3 returned to the real name "Vault Boy" in the game itself, although confusingly enough he is still called "Pip-Boy" in the trademark legal documents.

Vault Boy is, on some images or videos, accompanied by another Vault Boy who looks exactly the same but with black or brown hair, or with alternative Vault boyish things like creatures or items. On others, he is accompanied by Vault Girl. A black version of Vault Boy appears briefly in the "Leaving The Vault" video in Fallout 2, with his hair fashioned in a crew cut.

Most Vault Boy icons for skills were illustrated by George Almond 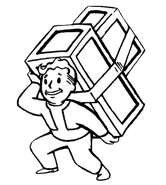 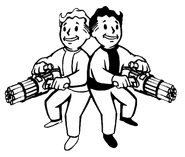 Walking Vault Boy from the Fallout Bible, also by Menze 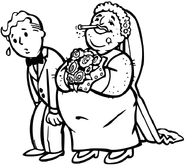 Classic Vault Boy and Fat Vault Boy, for the Married in Fallout 2

A standard Vault Boy from Fallout 3, illustrated by Natalia Smirnova 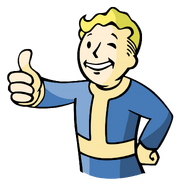 The mobster Vault Boy as depicted in Fallout: New Vegas 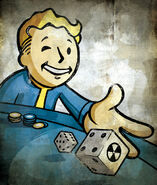 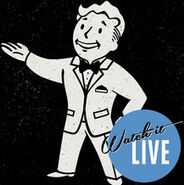 Vault Boy, in a business suit, for Fallout 4 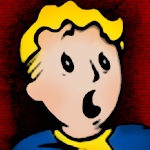 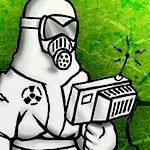 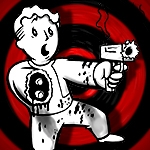 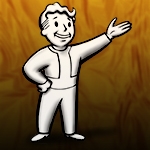 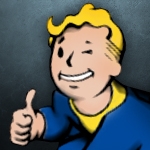 A watch during the Tranquility Lane simulation in Fallout 3

Vault-Boy statue in Fallout 4 and 76 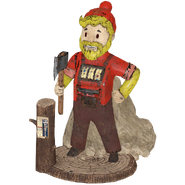 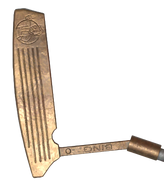 On a Fallout 76 golf club 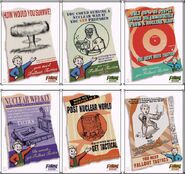 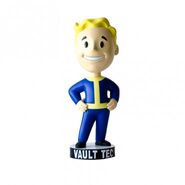 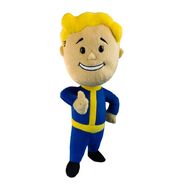