Fallout 4
“There's supposed to be a vault somewhere out here... a place called Vault 95. I've heard that Vault-Tec used it for some kinda social experiment... stuck a bunch of junkies inside to poke and prod. Well, they supposedly had some special method to clean up those blokes in there... some kind of a machine or somethin'. If we could get inside, maybe that machine could help me.”— Cait during Benign Intervention

Vault-Tec created Vault 95 as a rehabilitation facility for people suffering from chem addiction. The overseer position was elected by residents of the Vault, changing yearly on October 30.[1] The elected overseer in 2082 was Jane Myers, who was tasked with facilitating daily support meetings and ensuring other residents adhered to the rules of the Vault-Tec Rehabilitation Program.[1] Residency in the Vault required compliance with the program, regardless of whether chem dependency was considered to no longer be an issue, and the residents were generally cooperative.[2]

The Vault residents progressed through the program for five years, after which a planted Vault-Tec agent masquerading as a fellow resident was to open a hidden stash of drugs.[3] The agent would thoroughly document the response of the community thereafter.[4] Before doing so, the agent noted that the results of the experiment were thus far successful, writing that although some residents still struggled with chem withdrawal, the program helped them deal with the symptoms and cope with their new life in the Vault. He continued to record that Vault-Tec's hypothesis was correct, in that when there is no other alternative, an individual can recover from addiction.[4]

On October 23, 2082, five years after the Vault had been sealed, the agent recorded his plans to wait until the populace was asleep and open the stash. He records his thoughts on how isolation and the removal of addictive substances had been positive for the residents, and the next stage of the research would reveal the impact the same substances might have on the community.[4]

The revelation of the stash immediately destroyed the residents' family-like bonds and resulted in violence, with some residents immediately succumbing to their urges, and others resisting in an attempt to hold true to the program.[5] Others realized that the situation was intentional, and recorded their anger at being deceived and exploited by Vault-Tec.[6]

In 2287, the Vault is located at the northeast edge of the Glowing Sea, and serves as a base of operations for the Gunners.

In a blueprint behind the overseer's desk, the entire layout of the Vault can be seen, as well as notes indicating its planned capacity of 72 individuals. The entrance is heavily guarded by Gunners and their robots, with two Assaultrons and a turret outside, and one Assaultron, a Mister Gutsy, and six more turrets inside. A cooking station is outside on the roof.

An elevator takes one down to the Vault itself. An Advanced-locked door in the laser tripwire-trapped entry corridor reveals a small room with a terminal controlling the two turrets in the nearby atrium. Connected to the atrium are three separate sections: the facilities wing to the south including the cafeteria on the lower level and the research room, clinic, and classroom/detox facility/clean room on the upper level, the residential wing to the north including the living quarters beyond a heavily trapped corridor, and the atrium in the center including the Gunner's bunkhouse and reactor room below and the overseer's office and a second clinic serving as a hair salon above. The atrium door sealed with the Master-locked facilities wing terminal leading to the facilities wing can be opened using the overseer's terminal upstairs in the overseer's office. Among other loot, a trunk is found in the detox facility, and an armor workbench is in the living quarters. A cooking station and eleven beds are in the Gunner's bunkhouse below the atrium, and an Advanced-locked door at the base of the stairs from the bunkhouse to the reactor room leads to a small storage room containing an Advanced-locked floor safe.

The hidden stash of drugs may be found in the living quarters, through the broken wall to the right of the restrooms at the western end. Despite the fate of the Vault, the stash still contains chems and alcohol. Multiple skeletons wearing Vault jumpsuits are found in and around the stash as well as throughout the rest of the Vault. In one of the closed stalls in the restroom just west of the stash is a skeleton with two doses of Psycho. In the western room of the living quarters just east of the stash are two skeletons splayed across the furniture and surrounded by what appears to be a tea party, complete with a mannequin attendee, Psycho, and Jet. In the northwestern room of the living quarters behind a Novice-locked door, a skeleton is slumped against the foot of a bed, Psycho at their feet and two Jet on an upturned wastebasket next to them.

Vault 95 only appears in Fallout 4. 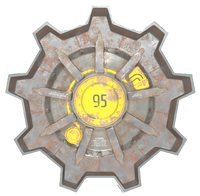 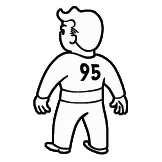