“I was thinking. And it hurt! Hurt my head. But I remember things, from before. I think I knew a woman. Or maybe I was a woman! Aah! It hurts!”

Vault 87 super mutants or East Coast super mutants are the variant of super mutant found throughout the Capital Wasteland in 2277. In Fallout 3, there are four variations of the super mutant, with an additional variation being introduced with the Broken Steel add-on.

The first super mutants of this variety were created in 2078, becoming a permanent feature of the Capital Wasteland. Too dumb to overrun it, but too strong to die off.[1]

Like all super mutants, they appear to be powerfully-built, hairless humanoids standing seven to eight feet tall and clad in heavy armor made from car parts and scrap metal. They differ from their Western counterparts in that they possess a yellow-green skin color as opposed to the green or blue colors of their western cousins, as well as thick, bulging veins. They are also generally less intelligent and more aggressive. They also appear more healthy, as they are never seen with any cybernetic implants or organic disorders. However, unlike their distant cousins, they retain less of their humanity after transformation, and no distinguishing features from their former lives can be found. Every super mutant speaks in a deep, guttural voice that emphasizes each syllable due to their mouths being permanently stuck in a tight, angry sneer. Also, as Fawkes demonstrates when retrieving the GECK in Vault 87, they are highly resistant to radiation.

During exploration of Vault 87, information from terminal entries reveals more about the process that humans go through to become super mutants. When exposed to the specific strain of FEV found there, muscular and skeletal systems develop rapidly while mental faculties diminish. Like other super mutants, despite having a build similar to a muscular human male, they completely lack functioning genitals, relying on FEV vats to create more super mutants. Another unique trait of the Vault 87 Super Mutants is that they grow larger as they grow older, and can range from eight to at least twenty or thirty feet in height; the largest are known as "Behemoths". These Behemoths seem to be even less intelligent than their smaller brethren, talking only in echoing roars and blindly destroying everything in their path, acting more like an unfettered beast than a soldier.

Despite their apparent lack of intelligence, the mutants are somehow able to organize themselves into a coordinated army (as evident from numerous raids). It seems likely that "might makes right" and those older and larger mutants who can still think somewhat coherently are in charge. They have also procured large amounts of advanced weapons, ammunition, equipment and maintain the FEV infrastructure necessary to transform humans to increase their numbers. How they are able to achieve these things is never explained, as the player never meets a mutant leader or governing body in the game, unlike in previous Fallout games.

In the ruins of D.C., the super mutants are looking for human captives in order to expand their army, as well as a new source of FEV; as a conversation between two super mutants in Vault 87 reveals that they are running out of "green stuff." They also appear to eat humans, as evidenced by the gore bags often found in their camps, as well as their threats of eating the Lone Wanderer's corpse often shouted during combat.

When encountered at lower levels, super mutants are usually in groups of two or three, accompanied by one or two centaurs, often employed as a sort of a rudimentary attack dog. At higher levels they can be found in groups of three to five, with a few centaurs acting as their watch dogs.

These are the youngest and weakest of the Capital Wasteland super mutants. They are usually encountered in groups of two or three, led by a stronger super mutant. Regular super mutants have almost twice as much health as most standard human non-player characters, but this is somewhat offset by their lack of body armor. Some of their prime locations are the GNR building plaza, the National mall, the Capitol building, the Statesman Hotel, the National Archives, and Falls Church. They can also be found aboard Mothership Zeta in stasis chambers. Freeing them will prompt their hostility.

Super mutant brutes are stronger and tougher opponents than regular super mutants, as they are better armed and armored. They are most commonly seen once the player character reaches a higher level. Brutes are easily distinguished by their galea-like metal helmets and crudely stylized metal armor.

The super mutant overlords are variants added to the game in Broken Steel. They are aged, even more powerful than super mutant masters, and much harder to bring down. Super mutant overlords appear to be evolving into behemoths, and are about half-way between the normal super mutants and behemoths in size. Their intelligence (in comparison with other types of super mutants) is questionable, but they are smart enough to wield Energy Weapons with some degree of skill. Sometimes, they are seen leading groups of other super mutants, although they are more frequently seen in pairs, if not completely alone. Overlords also have a 40 unblockable damage bonus when attacking with a tri-beam laser rifle and a +25 damage bonus when attacking with a special version of a super sledge. When carrying an assault rifle or a Chinese assault rifle, they use a one-handed pistol animation. They have a good chance of dropping above-average loot such as stimpaks, mini nukes, and purified water.

Towering above any player character, at about 20 feet tall, the behemoths are the greatest threat to humanity found among the Super mutants. There are only five behemoths to be found in the game, although reports of their sightings continue through dialogue amongst the Brotherhood of Steel.

These super mutants are the oldest and strongest of their kind. As well as being many times larger than any other humanoid creature, due to brain degradation, they will not speak; instead they will make monstrous roars. They are usually armed with an almost unrealistically large fire hydrant mounted on a large pipe; other than that, they also use their enormous fists. Either way, both weapons are heavy-hitters, and will cause major damage against any enemy smaller than them. They carry a cage made from shopping carts on their backs, used to carry off captured humans to be mutated or devoured later.

Killing all five behemoths will unlock the achievement/trophy, The Bigger They Are...

The Evergreen Mills behemoth model remains in the game files of Fallout: New Vegas, minus the texture.

Vault 87 super mutants appear in Fallout 3 and its add-ons Operation: Anchorage, Broken Steel and Mothership Zeta, but only in its cryo lab. They are mentioned in The Pitt during a conversation with Midea. 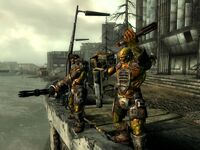 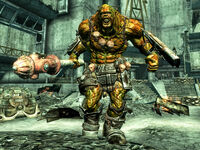 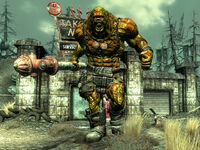 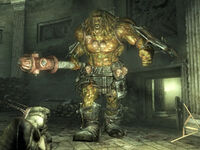 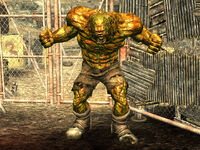 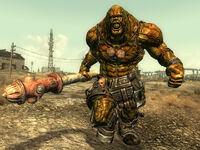 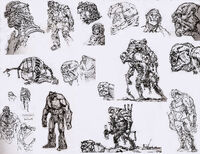 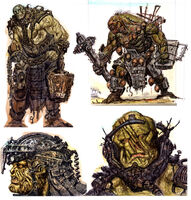 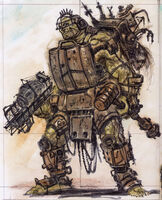 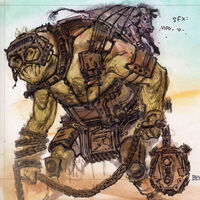 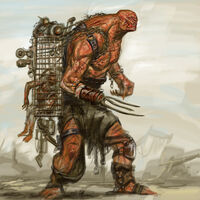 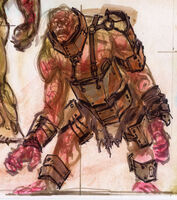 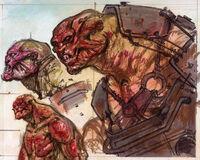 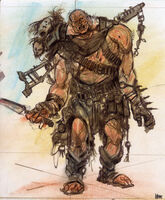 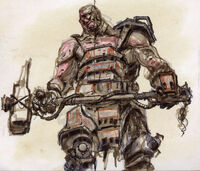 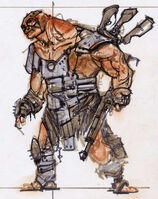 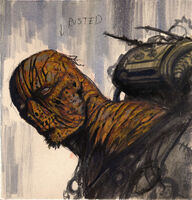 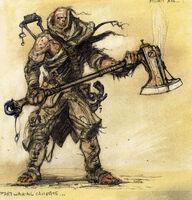 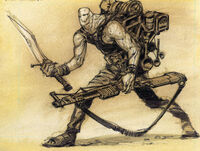 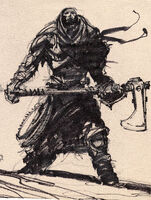 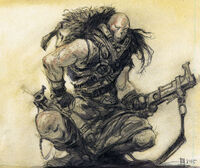 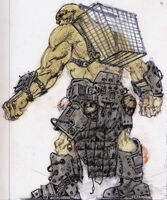 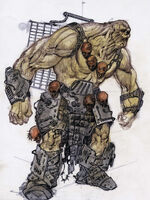 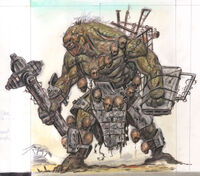 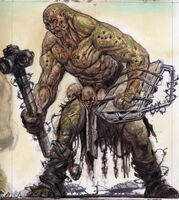 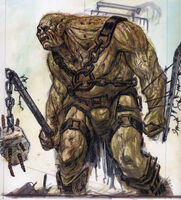 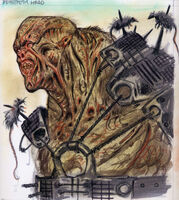 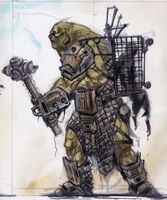 Retrieved from "https://fallout.fandom.com/wiki/Vault_87_super_mutant?oldid=2526529"
Community content is available under CC-BY-SA unless otherwise noted.