Picking Up the Trail
Finding the Garden of Eden

Fallout 3
“Entrance to Vault 87 will be particularly difficult for you, I'm afraid. The area is highly irradiated; lethal levels are all around the entrance. Gaining direct access will be quite impossible.”— Scribe Rothchild

Vault 87 is a Vault-Tec Vault located in the Capital Wasteland in 2277. It is located northwest of Little Lamplight and southwest of Broadcast tower KT8. It is the birthplace of the super mutants and centaurs in the region.

Construction on Vault 87 began in May 2066 and finished in December 2071. The primary computer system was Cyberbrain v2.3, while energy was provided by a General Atomics nuclear reactor, with a backup Versicorps fusion power generator. Non-standard equipment included four stasis chambers, a plasma containment field, six food processing stations and a Garden of Eden Creation Kit.[1] Around 2076, the original Vault experiment was scrapped and the Vault was converted into a secondary research center that would study the effects of the Forced Evolutionary Virus on humans, exclusively for Dr. Wayne Merrick and his staff, starting the Evolutionary Experimentation Program.[2]

After infection, both male and female subjects initially change to an asexual state, with the males improving in upper body strength,[3] and both males and females receiving a thicker and more resilient skin after ten days.[4] However, the project ultimately failed, as one female died due to massive loss of her brain fuctions,[5] and all other subjects had to be terminated after fourteen days, after experiencing increased levels of anxiety and rage caused by mental changes.[6]

The overseer and his security guards were well aware of the nature of the experimentation,[7] as they were following their orders from Vault-Tec.[8][9] However, the standard security measures were not enough. A year after the Vault was sealed, some test subjects broke free, overwhelming the security forces.

Super mutants kidnap humans from all over the Capital Wasteland and bring them to the vault to be mutated.[10] They have been doing so for nearly 200 years until their source of FEV started to run out. Because of the shortage of the "green stuff," there are now super mutant bands searching all over the Capital Wasteland for a new source of the virus.[Non-canon 1][Non-canon 2]

By 2277, the Vault is in a state of disrepair. Lack of maintenance led to advanced deterioration of subsystems and even the very structure of the Vault. Parts of it have collapsed entirely. The super mutants, owing to their low intelligence, have adapted various sections of the bunker in an ad hoc fashion. For example, medical recovery rooms were turned into makeshift prison cells meant to store experiments deemed a failure.[11][12][13][14]

The radiation near the aboveground entrance to Vault 87 is the highest in the game (as well as the entire Fallout series), peaking at nearly 4,000 rads per second in the center, and approximately 3,600 rads per second at the Vault's doorstep, which can kill the player character in about 0.29 seconds.

The overseer's terminal states, "I'm quite sad to report that due to a direct hit from what I presume to be a nuclear weapon on the entry area of Vault 87, we will be unable to provide the Scouting Reports as outlined in Vault-Tec's Operations Manual. The main door to Vault 87 is damaged beyond repair and we are detecting extremely high levels of lethal radiation outside and in the entry tunnel."

It is possible to reach the entrance through the extensive use of RadAway in combination with clothing providing radiation resistance and Rad-X. However, as the overseer's message states, the door is inaccessible, making the Vault impossible to enter from aboveground. The map marker will activate near the entrance. There is a dead scientist in a radiation suit that can be found near the Vault door, as well as RadAway and Rad-X, presumably carried by the scientist, but apparently not enough to prevent her death by massive radiation exposure.

The entrance can also be found from within. The test labs section of the Vault has a key-locked door near where the Lone Wanderer is captured and taken to Raven Rock at the end of the quest. Going in there will reveal the Vault door, though nothing is behind it.

Super mutants have built a barricade of broken girders and wrecked cars around the entrance. If one decides to venture into this one-way deathtrap, they have to defeat them before going in, remembering that super mutants can be exposed to intense radiation without ill effects, like the possible companion Fawkes. One can fast travel from the Vault's entrance despite the heavy radiation which normally prevents fast-travel; though, almost always, one will arrive dead. An Enclave eyebot usually patrols south of the entrance.

Before Vault 87 can be accessed, The Waters of Life must be completed, a part of the main questline, by speaking with Scribe Rothchild in the Citadel. The Lone Wanderer will then be sent there to recover the Garden of Eden Creation Kit, also known as the G.E.C.K.

Vault 87 can only be accessed through Little Lamplight, via two routes. These are revealed to the Lone Wanderer by questioning Mayor MacCready. The more dangerous route involves crossing Murder Pass. This is the initial option suggested by the mayor. However, he also informs the Wanderer that a broken computer terminal in Little Lamplight will allow direct access to the Vault via a different, safer route.

To access the terminal, one must speak to Joseph. Joseph can fix the broken terminal, allowing it to be hacked, but he will only do so if Penny has been rescued from Paradise Falls, or if the Lone Wanderer has a high enough Science or Speech skill, or the Child at Heart perk. Joseph can be found in the Little Lamplight schoolhouse in the morning. The Lone Wanderer must have a Science skill of 50 to hack the terminal to get into the Vault. If Penny is not rescued, or if Joseph becomes upset through dialogue, entrance through Murder Pass will be the only option to get to Vault 87.

To access Murder Pass, the Lone Wanderer must ask Mayor MacCready to open the gate, which is located north of the souvenir building. The pass houses several super mutants armed with heavy weaponry such as missile launchers and miniguns. There are also a number of traps along the route. Murder Pass is a good choice for earning experience, and also contains several first aid boxes, a decent amount of ammunition, a Stealth Boy, a Nuka-Cola Quantum and a U.S. Army: 30 Handy Flamethrower Recipes skill book.

Traveling through the Vault

Vault 87 is very similar to all the other Vaults a player may visit during the game, with narrow corridors and small rooms connected by the main lobby. Once inside the dimly lit Vault, the Lone Wanderer will encounter various super mutants and centaurs. The Lone Wanderer can also find the remains of failed FEV subjects in addition to the mutilated bodies of victims and gore bags.

Eventually, the Lone Wanderer will encounter a friendly super mutant named Fawkes, who was sealed in a test chamber and left there decades before. Fawkes, via the intercom, will offer his services in acquiring the G.E.C.K. in return for being freed from his cell. Though Fawkes does not have to be freed, the super mutant will indeed honor this bargain and help the Lone Wanderer acquire the G.E.C.K. by serving as a guide, as well as attacking any future enemies encountered, and finally, retrieving the device itself from its highly irradiated resting place. However, the same goes for the door and there are three options for interaction. One of these choices has the player activate the G.E.C.K., killing the player. Later, if the player character has good Karma, Fawkes can be recruited as a follower, after The American Dream.

There are two methods to free Fawkes. First, in the room at the end of the right hallway, a fire can set off the fire alarm in a room inhabited by two super mutant variants, which will open all five isolation rooms. However, in the process, two centaurs and a hostile non-player character will also be freed. Hacking the Average-locked terminal located next to the fire alarm will make it so the player can unlock an individual chamber, of which Fawkes' cell is the fifth.

The surroundings of Vault 87 are guarded by several super mutants

Nikola Tesla and You in the reactor chamber

Alternate entrance in The Great Chamber

A no-radiation sweet spot below the doorpost

The GECK being released from the chamber

Activating the GECK in the chamber 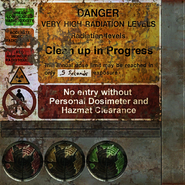 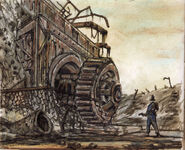 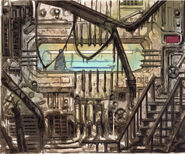 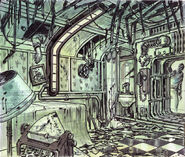 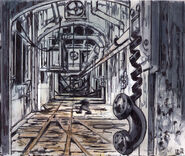 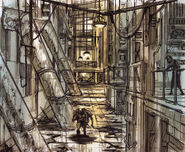