Fallout: The Board Game location 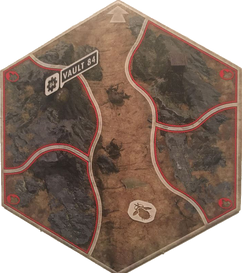 Vault 84 is one of two vault locations in Fallout: The Board Game developed by Vault-Tec.

Vault 84 has been closed for almost its entirety, with few outsiders being welcomed inside.[1] They had a supply line and trade with Vault 109 before that vault's destruction. Each year, there is a vote held in the vault to exile who the citizens deem the most dangerous. Whoever obtains the most votes may never return to the vault. Overseer Hayes lets you wander into the vault after suspicion has fallen on her, as she believes letting in some "fresh blood" will help.[2] After reading her entry log about the voting system, she will be exiled during the vote once exposed.

Vault 84 is located on the northwest side of the tile, within a rough terrain space. The vault is surrounded by rough terrain. A critter spawn location is in the center of the tile.

This vault is on a green tile and hidden away behind rough terrain. When the Vault 84 tile is flipped, a critter will spawn.

Even if you are a super mutant, ghoul, synth, vilified, or idolized, the vault does not react in any way at all.

Retrieved from "https://fallout.fandom.com/wiki/Vault_84?oldid=3204251"
Community content is available under CC-BY-SA unless otherwise noted.