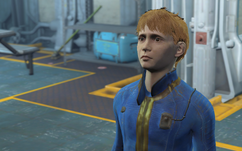 Austin Engill as seen in Vault 81

Vault 81 Tour is a miscellaneous quest in Fallout 4, where the player is offered a tour of Vault 81 by child resident Austin Engill.

Retrieved from "https://fallout.fandom.com/wiki/Vault_81_Tour?oldid=3417941"
Community content is available under CC-BY-SA unless otherwise noted.