Vault 81 is a Vault-Tec facility in the Commonwealth in 2287.

Vault 81 is an active, functioning vault. The former overseer's terminal (stored in the generator room) reveals this success is due to the original overseer actively sabotaging Vault-Tec's original mandate by refusing to conduct the experiments.[1][Non-canon 1]

Vault-Tec created Vault 81 with the purpose of developing a single, universal cure for every sickness that humanity could possibly suffer from, using the residents as human test subjects. The vault was divided into two separate areas including the main area and a secret section, where Vault-Tec scientists would conduct their research and observe inhabitants as they were unknowingly exposed to different diseases and cures. The diseases were released via propellant nozzles hidden within the resident's rooms. In the case of an evacuation of the vault, everyone was to be incinerated with the same propellant nozzles.

The first vault overseer, Dr. Olivette was skeptical of Vault-Tec's goal and the possible use of human experimentation.[2] She planned to blow the whistle if it was found to be unethical. However, when she received her full briefing, she found out the true nature of the experiment and also discovered that Vault-Tec had major backers in the federal government, rendering blowing the whistle as moot. Dr. Olivette was determined to not let the residents of the Vault be used as guinea pigs and tried to think of a plan. On the morning of the Great War, Dr. Olivette received the "call" to start the notification of staff and residents but sabotaged the call list so the science staff wouldn't be notified and report in.[3] Her plan mostly worked; however, three of the science staff turned up. Kenneth Collins and Jim Flint came over with the general population and the third one, Burrow, was visiting to ask when the next drill would be.[4][5] As the three scientists worked to create their cure, Olivette watched over all of their data and personally had to approve the scientists moving onto Phases II and III, animal testing and human testing on unknowing participants respectively.[6]

Before human testing could begin, Olivette disabled the delivery systems, cutting off the scientists from infecting the vault dwellers.[7][8][9][10] Additionally, she also sealed all access points to the secret vault, leaving the three scientists to die. Though remorseful of what she had done, Olivette took solace in knowing that the scientists would have enough food and water to live out the rest of their days. To prevent any commotion within the general population, Olivette kept the vault's true purpose and the existence of the secret vault a closely guarded secret.[11][12]

Isolated from the other side of the vault, the scientists continued to use animal testing with their last remaining population of mole rats. To help with the research, Dr. Collins modified a Miss Nanny lab assistant to take on greater responsibilities due to the staff shortage, creating Curie.[13][14] When the scientists eventually died of old age, Curie remained and worked on the cure alone, spending decades conducting trial after trial. She achieved the vault's objective in 2204, perfecting the universal cure. Curie reached a level of self-awareness over the years; however, she was unable to overcome her original programming, which required authorization from a Vault-Tec employee in order for her to leave the vault and begin a new line of research. She patiently idled for decades, awaiting a response from security.

Meanwhile, the residents in the main vault went on with their lives completely unaware that anything was amiss, or that they had been intended as test subjects.[15] In 2277, Overseer McNamara opened the Vault for the first time, allowing communication and trade with the outside world. This provided a badly needed source of food and other vital supplies, especially parts and tools to repair the vault's deteriorating systems. Many residents maintained an isolationist or even xenophobic mindset, distrusting any outsider who was allowed to enter.[16]

In 2287 Bobby De Luca, one of Vault 81's dwellers, had discovered one of the entrances into the secret vault and used it to store his drugs. Austin Engill witnessed Bobby opening the door and went in to investigate. He was bitten by one of the lab mole rats, which had escaped containment and started a colony in the secret vault decades before.[17] This nest was still infected with the various diseases used in the experiment, resulting in Austin acquiring an unknown disease, which would be lethal for his young immune system. When Bobby revealed the existence of the secret vault, the Sole Survivor agreed to search it for a potential cure. Inside, the Sole Survivor discovered Curie, who handed over the last unexpired dose of her universal cure. The Sole Survivor could either use it on themself, leaving Austin to perish and earning the animosity of the vault dwellers, or turn it over to save Austin and be granted a room in the vault by Overseer McNamara.

Vault 81 is divided into two main areas: the regular vault, where the residents live, and the secret observation area, where the scientific team used to observe the vault dwellers and conduct research. By 2287, the secret area is overrun by a special breed of mole rats while the regular vault is still functional and inhabited.

There are two entrances from the main vault to the secret vault: an elevator located in the lobby, and a secret door in the reactor room. The elevator cannot be used until the end of the quest Hole in the Wall and the secret door is not unlocked before the beginning of the same quest.

The vault opens to the admission area with the security office in the north. An elevator at the end of the hall leads to the rest of the vault. The central atrium is split into the two floors: the top floor contains the depot where people can trade, the overseer's office and a spare room (which can become the Sole Survivor's after completing Hole in the Wall); the lower floor contains the barber, cafeteria and the hallway leading down to the residential area.

The secret vault is a combination of vault architecture and cavernous dirt walls and floors. Navigating through the broken walls of residences leads to the small atrium which attaches to the maintenance area. Above the generators lies the entrance to the research and observation area.

The observation corridor covers the depot and overseer's office. The security gate at the end leads down further into the research wing, into the molerat breeding area. The central room has two levels, with adjoining breeding cages and laboratories.

The first one on the right from the entrance contains a Master-level safe. The upper floor has a door leading further into the vault and, on the opposite end, a small medical room with a mole rat brood mother and a steamer trunk. A staircase off the south side of the second floor of the cells leads upstairs to a room containing Curie as well as an elevator to get back up to the normal Vault 81.

Vault 81 only appears in Fallout 4. 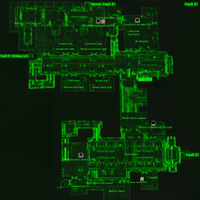 The medicine bobblehead in Curie's laboratory 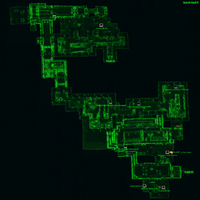