Vault 79 is a Vault-Tec Vault located in the Savage Divide region of Appalachia.

Constructed in secret by the Vault-Tec Corporation from 2072 onwards,[1] Vault 79 was built with no expenses spared for concealment; a different contractor to the other Appalachian Vaults was used to supply concrete,[2] and land was acquired from local farmers by government agents claiming the land was radioactive, offering large sums of money as compensation.[3]

Its stated capacity was 120 dwellers.[4] The number in Vault 79's designation was chosen in reference to the atomic number of gold, the precious resource that the Vault was designed to store and protect. All the gold from the bullion depository at Fort Knox was secretly transferred to Vault 79 by military forces (such as Captain Fields' team) to act as safe storage and to be used as the basis to rebuild the United States of America and the economy.[5]

Orders given to the soldiers watching over it included treating all intruders as hostile agents and to be dealt with as such, all shift logs were to be packaged and delivered to the officer of the watch, activate the contingency plan when ordered, not to smoke away from the designated smoking area and to stay out of sight.[6]

The secrecy of the Vault was put in jeopardy in July 2072 when a group of soldiers guarding the installation stole millions of dollars and went to gamble in Las Vegas. They were subsequently engaged in a shootout at the Ultra-Luxe casino by the local police forces in an attempt to silence them, and were all killed despite their attempts to surrender, with the sole survivor being Sergeant Kathryn Montgomery, who had been staying in the Lucky 38. Branded as a Chinese spy and dubbed "Shanghai Sally," she escaped the city but was killed trying to flee Galveston, Texas, her boat being destroyed by the USS Wade.

Montgomery was not the final witness to be silenced however, as her partner C. Rutkowski and others who remembered the group from bars around Berkeley Springs disappeared soon after. The dramatic shootout and cover-up attracted the attention of Flavia Stabo, who began investigating Montgomery and the other soldiers and found the Vault shortly before the Great War. Stabo was buried in a shallow grave near its entrance for her troubles, one of the last pre-War casualties of the Vault's need for secrecy.

As with the other Vaults, Vault 79 was sealed shut during the Great War in 2077 by the soldiers on shift, who had received word from the Air Force.[7]

After the war, the Vault remained sealed, awaiting orders from the outside that the Vault's gold deposits were needed. At an unknown point, there was a mutiny led by a Secret Service agent nicknamed "Shorty"[8] among the inhabitants, which killed many of them, and the numbers dwindled further over the years as at least three others took their own lives.[9]

By 2103, rumors of the Appalachian treasure drew people seeking it out to the region, and they enlisted the help of a Vault Dweller to obtain it. After they breached Vault 79, the remnants of the Vault's Secret Service detachment allowed them to leave with some of the gold.

The main entrance to Vault 79 is inside of the Mysterious Cave north of the Bailey family cabin. A keypad can be found on a wall inside the cave, which reveals an elevator. There are two ways to obtain the randomized code for the elevator:

The elevator leads to the large cavern in front of the signature cogwheel door of Vault 79. Once inside the cavern, one will see a small trailer, a small warehouse section, a truck trailer with goods, and a platform including the Vault 79 entrance terminal. The Vault door could not be opened until the Wastelanders update when the interior became accessible.

Another entrance to Vault 79 is inside of a shack also north of the Bailey family cabin (but not as far north as the mysterious cave). A call button can be found on a wall inside the shack, but the laser grid cannot be opened until after completion of the main Vault 79 quest, Secrets Revealed, when you can pass through the laser grid and take the elevator to the gold storage Vault.

A wide variety of hostile robots and automated turrets inhabit the main areas of the Vault, while the reactor area contains feral ghouls and a single wendigo.

Vault 79 appears only in Fallout 76. It was introduced in patch 14 and the interior was made accessible with the Wastelanders update.

The entrance to the mysterious cave

Elevator to the Vault

A code locked laser grid to the blast door

The sentry bot powering up

A look down range

The entrance to the Operations sector of the Vault

A view into the reactor room

A view of the reactor ventilation system

Bottom of the storage (not available in normal gameplay)

The back entrance into the gold storage vault

Close up of Vault 79 slide from the slideshow 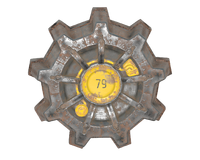