19h 45m
“While out exploring, one of your Dwellers found an old advertisement for Vault 789. Time to check it out!”

Vault 789 is a single-stage quest in Fallout Shelter. This quest can be found in a random container during an unrelated quest. After the dwellers return to the Vault, the quest will be available in the overseer's office.

The top floor of the vault has two separate pairs of raiders past the entrance room. On the second floor down is a pair of feral ghouls, and a pair of mole rats.

On the fourth floor on the room to the right is a raider leader accompanied by two raiders. The raider leader drops a Wazer Wifle. The left room has a group of civilized ghouls who reward you with a pet carrier, a lunchbox, T-45a power armor, and four bottles of Nuka Cola Quantum.

The fifth floor has a mole rat broodmother accompanied by another mole rat in the room to the right.

The bottom floor has a pair of raiders, a group of three feral ghouls, a mole rat broodmother accompanied by another mole rat, and a final pair of raiders in the last room. 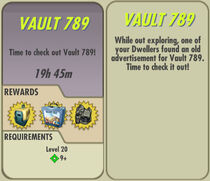