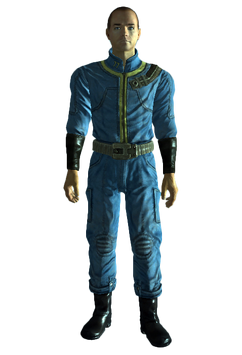 “Like I told you man. I don't fucking know where it came from. But it freaks the boys out. Some story from a while back, 'bout a stranger with no name. Just...get rid of the damn thing. Ain't no good gonna come from keeping it around. Besides, if it is.. his. Maybe he'll come back for it. Comprende?”— Burn this goddamn jumpsuit

The Vault 77 jumpsuit was the standard Vault-Tec jumpsuit originally worn by the Puppet Man, the only inhabitant of Vault 77.

The Vault 77 jumpsuit gives +5 to Melee Weapons and Unarmed skills, as it is said that these were the Puppet Man's favorite methods of murder. As there was only one inhabitant of Vault 77, and as Vault 77 isn't in the game, the suit is unique, like the modified utility jumpsuit.

It can be found by searching the slaver barracks in Paradise Falls (on a shelf). Next to it is a holodisk labeled "Burn this goddamn jumpsuit."

The Vault 77 jumpsuit appears in the One Man, and a Crate of Puppets comic by Penny Arcade and in Fallout 3.

Add a photo to this gallery
Retrieved from "https://fallout.fandom.com/wiki/Vault_77_jumpsuit?oldid=3171783"
Community content is available under CC-BY-SA unless otherwise noted.