One Man, and a Crate of Puppets location 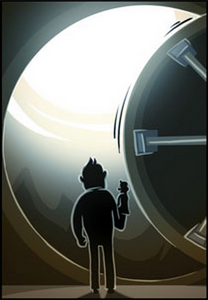 The Puppet Man leaves the vault

Vault 77 is one of the vault series of fallout shelters developed by Vault-Tec. Its location is unknown.

This vault was constructed in a small cave but it's not known when the construction of Vault 77 began. The purpose of Vault 77 in the vault experiments was to be populated by only one man and a crate full of puppets labeled "P13X U.S. GOVERNMENT ISSUE PUPPET RATION", as a study of the human condition in near-complete isolation, with a crate of puppets modeled after living beings as sole company. The vault door was designed to close automatically when the only Vault 77 dweller entered, and only to reopen months later.

The Vault 77 dweller, later known as the Puppet Man, entered the vault on 23rd October 2077 when the Great War began. At the one hour mark, he was pounding on the vault door and shouting to anyone who might be listening that they had forgotten all the other vault dwellers. By March 23rd, 2078, he had been reduced to sitting in front of the vault door and sobbing. On February 4th, 2079, he discovered and began to inspect the crate of puppets. By February 23, he had begun to act out simple scenes with these puppets, and by March 30th, 2079, he had created full roles and histories for them, the dog puppet being named "Reverend Hound" and serving as both sheriff and part-time reverend, and another grandmother puppet which he named "Grandma". He celebrated the birthday of the "King" with "Grandma" on this day.

But before going to bed, a Vault Boy puppet that he'd missed earlier began to talk to him (probably a side effect of his isolation and a descent into insanity), which the other puppets did not. One morning in 2079, the "King" was found dead, its head was torn off in an act of "regicide." When the Puppet Man confronted the most likely suspect, the Vault Boy puppet told him that they had, in fact, done it together and must flee before "Reverend Hound" came for them. The Puppet Man, accompanied by the Vault Boy puppet, opened the vault door (which was no longer locked) only to find a giant radscorpion holding up a car in each claw. Faced with this, he decided to "sleep on it" before proceeding. By December 2079, the Puppet Man had managed to leave Vault 77 along with the Vault Boy puppet and a giant ant which he rides in the wasteland. Vault 77 was thereafter abandoned.

List of known puppets from the puppets' crate and the names were given to them by the Puppet Man.

A Vault 77 jumpsuit can be found in Paradise Falls in Fallout 3, alongside an audio recording of an obviously worried slaver, saying how it scares the others and it should be burnt, and that "he" may be back for it. The slavers obviously fear "him," hinting that it may belong to the vault dweller who killed the slavers who captured him. The jumpsuit appropriately boosts one's Melee and Unarmed skills (given that these were the Puppet Man's ways of murdering).

Vault 77 appears only in the official Fallout webcomic One Man, and a Crate of Puppets.[1] Vault 77 is mentioned in Fallout 3 where a jumpsuit and a holotape can be found.

The cave outside Vault 77

Retrieved from "https://fallout.fandom.com/wiki/Vault_77?oldid=3238233"
Community content is available under CC-BY-SA unless otherwise noted.