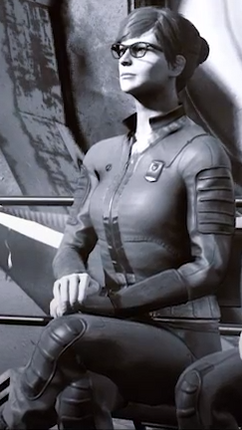 “Please, I gave 76 everything. You were all so brilliant. The first few years were hard, but we learned to trust each other. You learned to trust me. I was young... So young... Younger than most of you. But you accepted me as your Overseer.”— Vault 76 overseer, Overseer's journal, entry 6

The Vault 76 overseer was the leader of Vault 76 before 2102, when she left the vault prior to Reclamation Day.

The only child of a couple from Sutton, the overseer was a driven woman from the start. Whether it was running through a cornfield maze, getting straight A's in every possible subject or leading a troupe of Pioneer Scouts, she was always hitting life hard and fast, with barely any time left for herself.[1] Her father was a teacher, her mother a miner working for one of Appalachia's many conglomerates. Together, they led a happy, content life, an American idyll, against a backdrop of the ever-worsening international situation and the Sino-American War.[2]

She was one of the best students at the Morgantown High School, spending most of her time in the library honing her skills. However, tragedy struck when her mother was killed in a mining accident. In West Virginia, this was a common family story, but it did not make a difference for the future overseer. She withdrew into the library, seeking shelter among books, while her father tried to put the pieces back together. She fell in love with Evan around the same time. He graduated a year earlier than her and went to work in the mines like her mother, who had introduced the two. After her mother's death, Evan stuck with her, bringing her lunch to the library each day after his shift was over.[3]

The other pivotal event in her life was the career fair at Morgantown, where she met the Vault-Tec team. In her eyes, it was "like a light turned on." She decided to dedicate herself to protecting families, the future and America. With her grades, it was a matter of course for her to be accepted into the Vault-Tec University. Her father was just happy to have her stay in West Virginia.[3] After four years of learning and breathing Vault-Tec, and a field posting at the Vault-Tec Agricultural Research Center,[1] the overseer finally graduated, with a degree in nuclear fusion and honors in the overseer track. She was fast-tracked for an overseer position, skipping years of waiting (perhaps due to the escalating risk of nuclear war), and at Vault 76 to boot, a promising vault in Appalachia. When she learned the news, she was ecstatic and Evan proposed on the spot. She accepted his proposal. The only darker side of this time period, apart from the looming atomic holocaust, was the death of her father a few months later.[4]

However, she soon learned the truth about the vaults, the societal preservation program and the experiments that were going to be carried out on the dwellers. Although Evan wanted her to go public with the information, she hesitated. While she knew that experimenting on vault residents was ethically wrong, the goal of finding the most suitable people to repopulate, to understand humanity pushed to the extremes, was a goal she could understand and empathize with. She justified it as necessary for the survival of humanity. Vault-Tec found out about her in short order, but instead of retaliating, the corporation instead took her into confidence, tricking her into believing they were the "good guys" in the situation. She was initially slated to be the overseer of Vault 101 due to her engagement with Evan; only by entering Vault 76 as an unmarried woman could she remain in Appalachia. She chose Vault 76 over Evan, and while she felt guilty over her decision, she expressed her belief that Evan was not Vault 76 material and that she had done what she thought was best for the world, as well as enforcing her desire to remain in her home state. [5]

If the overseer had attempted to enter Vault 76 with Evan, the corporation would have had to give Evan a spousal exemption, and the vault had a long list of candidates more qualified than a mere miner, such as a civil engineer and a cousin to a Vault-Tec executive. The overseer broke off her engagement, betraying Evan and leaving him on the surface. She would not learn of his fate until 25 years down the road, finding him (or what remained of him) as Evan succumbed to the Scorched Plague, asking the residents to put him out of his misery, as she worked towards securing the nukes and containing the plague.[6]

Although the early years were difficult, as the overseer was the youngest among the vault residents, surrounded by the creme de la creme of society, she eventually gained their trust and learned to cooperate.[6]

She served at her post for 25 years, until Reclamation Day, on October 23, 2102. On that day, the overseer left Vault 76 several hours ahead of the other residents. A prepared recording greets the player character through the intercom while instructing them to leave the vault. After ensuring the well-being of every vault resident for twenty-five years, she was directed by Vault-Tec to secure three nuclear silos, namely Sites Alpha, Bravo and Charlie, for them, even if it meant going against the United States Armed Forces. She left a holotape for Pennington to give to the player character asking for assistance in her dangerous task. Scouting Appalachia for the silos, she also left a trail of holotape logs and journals for the residents to find, and to help follow her.[7]

Besides her Vault-Tec mandated job of finding the nuclear silos, the overseer journeyed to various locations in Appalachia to view what had become of her homeland. After realizing that Appalachia was initially bereft of human presence near the vault but rife with mutants and rogue bots, she deployed her C.A.M.P. at the crossroads north of Flatwoods, setting up a rallying point for the residents. Against her advice, she left it behind, so that the dwellers could use it, while she moved south into Flatwoods.[8] Flatwoods was even more depressing than her first impressions, abandoned and ruined. She encountered her first Scorched victim there and realized that the situation was even worse than anticipated. The next stop was trying to find remnants of the Responders.[9]

Morgantown Airport was a nightmare. She remembered taking flight lessons at the airport, but after its fall to the scorchbeasts and their minions, it was a wasteland. The overseer analyzed the Scorched, observing them from afar and realized the terrible truth: The disease took over its host, eventually burning them from the inside out, creating petrified, fragile corpses that fell apart. She was then attacked by a scorchbeast, which put the final variable into the equation, its source. The already daunting task of controlling the military's nuclear potential became a desperate fight against an extinction-level event.[10] Although the Responders proved to be a dead end, the automated training they left behind came in use. She moved south to Charleston, tracking down the Fire Breathers. She realized these daring men and women fought the scorched more than anyone and resolved to find them.[11]

Besides her Vault-Tec directive, the overseer took a small detour, to visit places associated with her past. She eventually managed to find her fiancé Evan, who turned into a Scorched. Heartbroken, she locked him up in a warehouse basement atop Mount Blair and picked up the trail, focusing on the job at hand.[6] The trail led her to the Top of the World, where she encountered Rose, briefly. Rose's crude ways and demands for a quid pro quo did not agree with the overseer and she forged on, taking the Free States on.[12] Although she despised them as traitors and secessionists who turned their backs on America, she needed to know what they knew and what they wanted to do.[13] The breadcrumb trail continued to Charleston and the capitol building, where the office of the disgraced Senator Sam Blackwell was located. At this point, dealing with the demented automated systems began to grate on the good overseer.[14]

Unable to continue, she turned to the other clues found during her investigation, namely, the Appalachian Brotherhood of Steel. She picked up the trail at Camp Venture, continuing to their fortified headquarters at what was once Allegheny Asylum.[15] She realized they were a military outfit descended from the Army at Allegheny, and that they knew how to fight the Scorched. However, the secure elevator installed by the Brotherhood stood in her way. The only way get through it was to enlist.[16] She headed to Camp McClintock, where the automated training system put her through her paces and eventually accepted her into the Army, as Overseer Private/Private Overseer (she never really decided on which one sounded better).[17]

Having traveled up and down Appalachia, finding the remnants of what has been and what could have been, she realized what destroyed her beloved West Virginia - discord. Instead of cooperating, the various groups grew apart from each other, closed ranks and refused to work with each other. The Brotherhood, the Responders, Free States and especially the raiders, all refused to cooperate long term and paid the price, as they all went extinct. She was determined to lead by example and not let others fall into the same trap.[18] However, even as an Army soldier, her rank was too low to fool the automated systems at any of the silos. She never reached the Whitespring bunker, and was thus unable to gain a promotion, left with nothing to show for her effort and the fear that someone might figure out how to access them, sooner or later.[19][20][21]

Even after surviving a mole miner attack in the mountains,[22] the overseer's hopes were almost completely crushed when her vault family, the people she sacrificed everything for, started launching nukes manufactured by the Appalachian Automated Launch System, away from fissure sites and into other areas. She still hoped for their redemption, but something told her that the nuclear arms race would only get worse before it gets better.[23]

In 2103, one year after Vault 76 opened, the overseer, like many Vault 76 residents, was shocked to see people coming back to Appalachia.[24]

The Vault 76 overseer appears only in Fallout 76.

Her body exists in the game files, but is not used anywhere in the game. 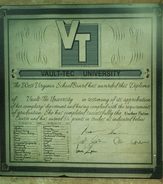 Diploma in her childhood home 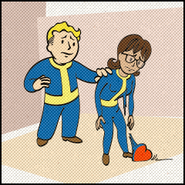 The overseer in the intro
Add an image to this gallery

Retrieved from "https://fallout.fandom.com/wiki/Vault_76_overseer?oldid=3171625"
Community content is available under CC-BY-SA unless otherwise noted.