Located underneath the Malden Middle School, this Vault was presented to the public as a safe place for children in the school to take cover in the event of a nuclear war. When the bombs eventually fell in 2077, every designated family with a student attending the school, along with the teachers, made it to the vault in time. Upon entering, the children were separated from their families and escorted to the atrium, while the adults were executed by security staff, under the guise they were receiving "orientation."

They were raised learning about the horrors of "Uptopland," a nickname for the newly made wasteland, and were told that they would be strong enough to venture out into the wastes and help the suffering people above upon graduation. If they were intelligent and physically well built, they were either "harvested" for their good genes when they turned eighteen, or those displaying good intelligence and obedience were recruited to the vault's science team after graduation. The others who were deemed insufficient to the vault's standards were executed upon reaching the age of eighteen after a ceremony "celebrating" their graduation.

At some point, the vault was opened and emptied. Some internal log entries suggest there was a rebellion among the junior test subjects, aided by a "graduate" scientist. In 2287 there are no residents remaining, and the vault is serving as a hidden Gunners stronghold within Malden.

The Vault is divided into three sections: the common, the lab, and the admin area. To access the lab and admin area, key cards are necessary to unlock the security doors. Downstairs is a combat simulation room, where one can use the terminal to initiate a combat training game and record their score online. This room also contains the Gunner commander that has a lab access card.

The admin section of the Vault can be found deeper in the Vault behind the sealed lab doors. Some of the doors that lead to the Vault overseer room within this section require an admin access card, which can be acquired/looted from one of the enemies lurking within.

Vault 75 only appears in Fallout 4.

It is possible that the quest does not trigger upon entering Vault 75, therefore causing the key cards not to spawn and making the Science bobblehead unobtainable. This may be caused by a misc quest pointing to the chems stash in the Vault. On PC this may be fixed by spawning the required keys (001A58A2 and 001A58A6) to allow further progress; the quest may be added and completed automatically when leaving the Vault or the quest may trigger when leaving the admin area and completed upon accessing the Overseer's terminal. This can also happen even if you got the "Search for Caps in Vault 75" miscellaneous quest.[verified]

Holograms in the combat simulation

Research section, with one-way glass in the floor

Grognak the Barbarian on the bed

Teddybear in the chair

Gunner on the left has the admin access card

A soldier's skeleton hidden behind a shipping crate

A soldier's skeleton handcuffed to a pipe in the kitchen

The Vault's blast door (can only be seen with noclip) 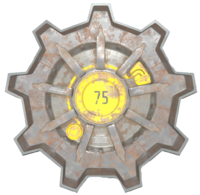