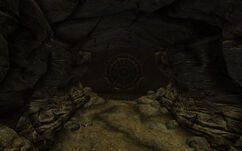 Interior map of the Vault

Vault 74 is one of the Vault-Tec vaults. The vault was not mentioned in any game and appears only in the game files of Fallout: New Vegas.

It was originally made by Bethesda Softworks developers for the official Fallout 3 G.E.C.K. tutorials. Despite not actually appearing in the game file of Fallout 3, it appears as cut content in the game files of Fallout: New Vegas, although it is only accessible through the use of the console commands.

Many raiders live in this vault.

Vault 74 is small, consisting of just an atrium, a clinic, an overseer's office, and no living quarters.

The vault comes with a simple quest called Exploring Vault 74. The quest can be started by simply entering the vault (by the use of console commands) and taking the Vault 74a overseer's log:

The Vault has been breached.
There was not enough power to level Five!

God have mercy on our souls.

The vault door uses the same world model as Vault 108.

Vault 74 appears only in the game files of Fallout: New Vegas. Due to its original nature of being a test demonstration, it is most likely to be considered non-canon.

Retrieved from "https://fallout.fandom.com/wiki/Vault_74?oldid=3208656"
Community content is available under CC-BY-SA unless otherwise noted.