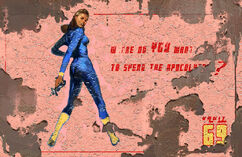 Vault 69 was one of the Vault-Tec vaults.

Of the one thousand people who entered, there was only one man.[Non-canon 1]

Vault 69 does not appear in any game and is mentioned only in the Fallout Bible, webcomic One Man, and a Crate of Puppets, and concept art for the canceled game Van Buren.

Retrieved from "https://fallout.fandom.com/wiki/Vault_69?oldid=3405389"
Community content is available under CC-BY-SA unless otherwise noted.