Vault 65 is a Vault-Tec vault in Appalachia.

The vault only exists in the game files. It has four generators, similar in design to the generators found in Vaults 51 and 94. The vault door stands vertically and is met with an extended catwalk. At the entrance are several radiation scanners. The vault is set up with 31 spawn points for feral ghouls and one glowing one, and includes a cave.

The vault is expansive with three elevators. Inside the vault, there are two default terminals without any entries, a chemistry station, and a cooking station. In addition to the sections listed below, the vault has a utility center with industrial machinery that also appears throughout Appalachia. Sections in the vault include: 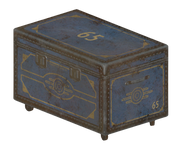