Vault 63 is a Vault-Tec vault located in the Ash Heap region of Appalachia in 2102.

As with the other vaults, Vault 63 was sealed shut during the Great War in 2077. Twenty-five years later in 2102, the vault remains sealed.

Vaults 63, 96 and 94 are associated with vault raids, a team quest where there is an emergency in the vault that must be fixed. Player characters are notified through an emergency radio beacon. These are instanced dungeons, where groups of 1-4 can enter and attempt to complete the raid for the chance at unique rewards.

The engineering, fireman and military certification terminals all contain an option to locate a fireman, engineer or officer respectively. Vault 63's reactor control terminal has an option to cool down the reactor of the vault, taking three minutes to complete. The security office terminal has no text or menu items, and the maintenance terminal gives the player character an option to activate the fire suppression system of Vault 63.

To the left of the metal bridge, there is an emergency management terminal containing most information about the vault.

There are two ID cards inside the vault, though they cannot currently be reached:

It is not currently possible to open the Vault 63 door or officially access its interior without using glitches. Entrance will be allowed at a later date, as a part of vault raids.

The vault number is a reference to the date of West Virginia's admission to the union on June 20th, 1863.

The shack concealing the cave entrance to Vault 63

The interior of the shack. The door on the left leads into the cave 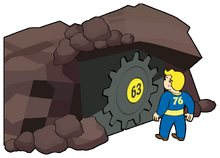 Upcoming quest image
Add an image to this gallery
Retrieved from "https://fallout.fandom.com/wiki/Vault_63?oldid=3066590"
Community content is available under CC-BY-SA unless otherwise noted.