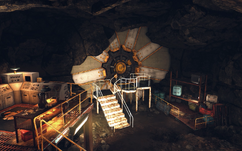 Vault 63 is a Vault-Tec Vault located in the Ash Heap region of Appalachia.

As with the other Vaults, Vault 63 was sealed shut during the Great War in 2077. The Vault remains sealed in 2103.

The Vault entrance is located inside a small cave, the entrance of which is concealed by a one-room shack. Inside the shack are several junk items. The door across from the entrance opens onto a small balcony with additional junk items, while the door to the left of the entrance leads into the cave. Outside the Vault door is a functioning terminal that divulges nothing about the Vault's status apart from the fact that it is sealed. A keycard slot next to the terminal accepts the "Vault 63 access ID card." There's also the "Vault 63 resident ID card" and "Vault 63 maintainence ID card

The engineering, fireman, and military certification terminals all contain an option to locate a fireman, engineer, or officer respectively. Vault 63's reactor control terminal has an option to cool down the reactor of the Vault, taking three minutes to complete. The security office terminal has no text or menu items, and the maintenance terminal gives the player character an option to activate the fire suppression system of Vault 63. To the left of the metal bridge, there is an emergency management terminal containing most information about the Vault.

There are two ID cards inside the Vault, though they cannot currently be reached:

It is not currently possible to open the Vault 63 door or officially access its interior without using glitches.

Vault 63 was slated to be part of Vault raids, however, the quests, items and interior cell associated with Vault 63 were never released.

Fast traveling to an Ash Heap Horde Event which has its map marker not placed in the Ash Heap (instead, in the center of the world map) will teleport the player to a non-playable Vault interior cell and the player will be disconnected from the server upon loading in. When the player resumes playing, the character will be spawned directly outside Vault 63.[verification overdue]

The shack concealing the cave entrance to Vault 63

The interior of the shack. The door on the left leads into the cave

Entrance on a cloudy day

Interior behind the door

Cut quest image
Add a photo to this gallery
Retrieved from "https://fallout.fandom.com/wiki/Vault_63?oldid=3488557"
Community content is available under CC-BY-SA unless otherwise noted.