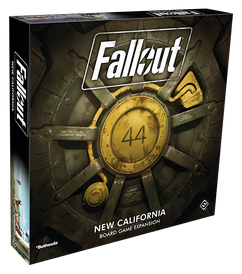 Entrance to Vault 44 on the New California Box

Vault 44 is one of the vault series of fallout shelters developed by Vault-Tec in the Fallout: The Board Game expansion Fallout: New California.

Unbeknownst to the vault dwellers, Vault 44 contained a secret section housing various dangerous creatures, with robots guarding and feeding them as scientists performed their research. Unfortunately, all of the automated systems combined with the electric chains used to secure the creatures drew too much electricity from the rest of the vault. Eventually, the vault's main refrigerator failed, destroying much of the food supply. Various insects also infested the vault, contaminating all of the remaining food and making it unsuitable for human consumption.

With the overseer having no way to open the Vault 44's main door, the vault dwellers all eventually perished. A vault scientist attempted to contact Vault-Tec to give them his research, but all his communications went unanswered. The creatures remain alive in the hidden section as the robots continue feeding them the contaminated food. At some point, wastelanders were able to breach the vault, as the main door lays open and dead bodies can be found inside.

Retrieved from "https://fallout.fandom.com/wiki/Vault_44?oldid=3280965"
Community content is available under CC-BY-SA unless otherwise noted.