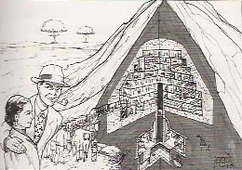 Image used as concept design for Vault 39 in the FO:BOS2 design document

Vault 39 (also known as the Lone Star Vault or the old Abilene Vault[1]) is one of the Vault-Tec vaults, located in what was known as Abilene before the Great War and is now called Lone Star.

The vault's original purpose in the vault experiment is unknown. Recently, due to Reese's experiments in the vault, it has become a veritable jungle with huge mutated plants that thrive there and will provide more than minor obstacles to overcome.[2]

The vault has three levels consisting of three medium to large maps. On the surface a broken-down shed sits next to the vault, in which a functioning car can be found.[2]

The player character would have had to fight their way through the mutant plants as the ecology desperately tried to kill them. Once at the third level, they would have found a G.E.C.K. and a key. On a desk, papers including bios on Banshee and the Jackals and a map showing the origin of the Nursery documenting Reese's movements southwards as well as his next destination, Austin, could be found. Using the key to drive the car away from Vault 39 would have ended Act II.[2]

Vault 39 was going to appear in the canceled Fallout: Brotherhood of Steel 2.

The developers had hoped the car in the shed would be a '59 Volkswagen Bug.[2]

Retrieved from "https://fallout.fandom.com/wiki/Vault_39?oldid=3331602"
Community content is available under CC-BY-SA unless otherwise noted.