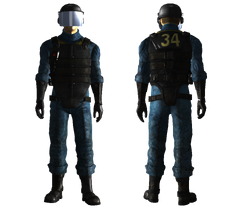 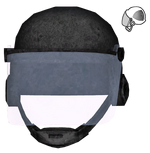 Vault 34 security armor was the armor issued to members of the security force in Vault 34. It is lightweight and well-armored, with a weight of 15 and a Damage Threshold of 16, giving it 1 DT point of protection more than a suit of combat armor at a little over half the weight. The armor is classified as a light armor; as such it has the second-highest DT of any light armor in the game, tied with Sierra Madre armor

, and bested only by Sierra Madre armor, reinforced

The primary drawback of the armor is its relatively low HP, requiring the armor to be repaired frequently. Without the Jury Rigging perk, this is limited to using the expensive combat armor. However, due to the armor's low value, it can be repaired cheaply by merchants and repairmen.

Sets can be found in certain security related rooms and the armory of Vault 34, they are normally found on top of tables and desks.

This armor reuses the normal map for the Vault 101 security armor from Fallout 3, rather than a correctly updated normal map. This is most noticeable when using this armor along with a Stealth Boy, which will clearly show the numbers "101" on the player's back while they are cloaked, rather than the correct "34". Sierra Madre armor is similarly affected. [verified]

The armor worn by a female officer (not seen in-game)
Add an image to this gallery
Retrieved from "https://fallout.fandom.com/wiki/Vault_34_security_armor?oldid=2946679"
Community content is available under CC-BY-SA unless otherwise noted.